If you are passionate about Champagne, I urge you to read this article in its entirety.

As with 2005 in Burgundy, 1996 in Champagne was one of those rare years that brought even the most elite to new, unprecedented heights. In my 20 years of collecting Champagne, I do not think I've come across a young vintage that shows as much muscle, as much promise as the towering monuments of 1996.

With no vintages of comparable stature on the horizon until 2002 (the top cuvees will not be released until 2012 or later!) collectors have been frantically stock-piling the obvious trophies of this century-closing vintage: Dom Perignon, Krug and Salon to name but a few. 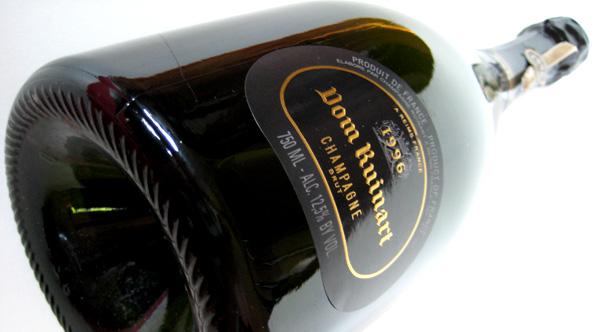 There is however "another Dom" that has been sitting quietly at this great table, shoulder to shoulder with the giants of Champagne. In fact, while Dom Perignon and Dom Ruinart have a shared history, in 1996 they have even more in common as Richard Geoffroy, Dom Perignon's genius Chef de Cave, was one of the winemakers for this wine! With one of the smallest productions of luxury cuvees and only recently reintroduced to the U.S. market, Dom Ruinart has been a well kept secret among collectors and has graced Europe's finest wine lists for decades.

The great Dom Ruinarts are held in the absolute highest esteem. Consider that the 1979 Dom Ruinart was judged "second-best Blanc de Blancs ever made in the world" at the Millennium tasting held in Sweden in 1999 with Richard Juhlin and other Champagne elites. A lofty and well deserved title.

This is one of those Champagnes that has a regular slot in the most important collections in the world. I have personally collected Dom Ruinart for well over 20 years and the 1964, 66, 73, 79, 82 and 88 have proven themselves some of the greatest Blanc de Blancs made in the latter half of the 20th Century. With age, these incredible Champagnes shed their baby fat and reveal a complex minerality that screams of Grand Cru Chablis. Think Raveneau with bubbles!

The 1996 Dom Ruinart has the stuffing to throw its hat in the ring, not only with the great Dom Ruinarts of the last 30 years, but also the big boys of 1996. This is a broad and incredibly lavish 1996, with layers and layers of opulent fruit and darker, richer notes of hazelnut, chocolate cream and nutmeg all held within a surprisingly muscular frame. Brioche and softly sweet pastry notes linger through the mid-palate before everything is brought into form and focus by an authoritative core of acidity. The balance is simply impeccable and the wine possesses a broad spine combined with a suaveness that makes it all seem effortless.

For me, the 1996 is closest in comparison to the 88 which is drinking beautifully now though it is still years away from maturity. Both are thoroughbreds of Chardonnay; fruit wrapped tightly around mineral and stone.

Founded in 1729 by Nicolas Ruinart, this is the first Champagne house in existence. In fact, the house's famous deep chalk cellars (called the crayeres), excavated by the Romans in 50BC, became a popular place to visit early on and are now considered a historical monument by the French government. 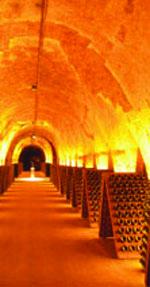 This is a magical place and it was a true highlight of my first visit to Champagne years ago.

As the story goes, Dom Perignon was a good old friend of Dom Thierry Ruinart who went on to pass the secrets he had learned to his nephew, Nicolas Ruinart, the founder of Ruinart.

Fans of Dom Perignon will have a natural affinity for Dom Ruinart. The two houses show a similar style due to this shared, storied history. In 1996 this comparison is even more apt: A little-known fact is that the genius Chef de Cave of Dom Perignon, Richard Geoffroy, was one of the winemakers for the 1996 Dom Ruinart!

Given this history and the importance of Dom Ruinart, it would make sense that the prestige cuvee of the house should honor him.

The first release of the Dom Ruinart prestige cuvee was the 1959. The wine is 100% Chardonnay all sourced from Grand Cru vineyards in the Cotes des Blancs and the Montagne de Reims. Only the best Chardonnay grapes are used and it is only made in the best vintages.