The absolutely perfect weather conditions (like the Bordeaux vintages of '82 and '00) caused collectors, many of whom had never bought Riesling before, to squirrel away cases at a time.

Unfortunately, this increased national spotlight and greater interest in Rieslings means that today it's difficult to find anything but loose bottles that haven't been standing up on a retail shelf for the last 3 years (I should know, I regularly scour the web and call retail stores around the nation to find older wine for my personal enjoyment).

If you can find bottles that have been well stored, they are often riper-style wines that are prohibitively expensive and still "in the tunnel" - a hibernation-like state of aging where their secondary flavors develop. They are very closed and backwards and need several years to re-emerge.

At a recent staff tasting of 25+ wines, everyone was impressed by the Zilliken's slightly petrolly, honeyed nose, and a palate with rich and delicious stone fruit, granny smith apple and a long resonating finish.

Those of you who find Riesling to be too sweet will be relieved - while not a dry wine (there is a bit of residual sugar) - the Zilliken offers excellent complexity and balance that is at its peak now and will surely stay there for five more years.

There are 13 wine regions in Germany. Think of these as similar to Bordeaux regions like Pauillac, St. Estephe, etc. The majority of wine imported to the US comes from one of five major regions: Mosel-Saar-Ruwer, Rheingau, Pfalz, Nahe, and Reinhessen.

Wines from each region are related by a general similarity of terroir, but the Germans, like the French, take great pride in the specific terroir of their vineyard sites.

Today's wine from Zilliken comes from the town of Ockfen and the vineyard of Bockstein, both of which are in the Saar portion of the Mosel-Saar-Ruwer region. 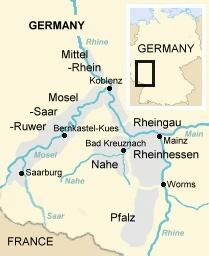 Where in the World?

The Saar is a river that begins near the highest peak of the Vosges Mountains in France and is a tributary of the Mosel River in Germany, which it joins near Trier, the nation's oldest city.

The Saar is also a sub-region of the famous Mosel-Saar-Ruwer, which is known internationally for its great wine and locally for its coal, iron, and steel industries.

The slate soil on the slopes of the river provides the distinct Saar terroir. While fairly steep, the pitch is not as great as that of its sister region, the Mosel, resulting in a softer, more elegant style wine.