The 2002 Taittinger Comtes de Champagne Rose presents what I believe is the greatest vintage rose Champagne deal that I've seen in my 20+ years of collecting. This wine is packed with incredibly rich and mineral-nuanced Pinot Noir fruit while exuding an energy that makes it feel almost weightless.

This wine has become a downright obsession here at Crush and though the results are "unofficial," this must be considered our Champagne of the Year given the bottle's vintage, quality, rarity and price. 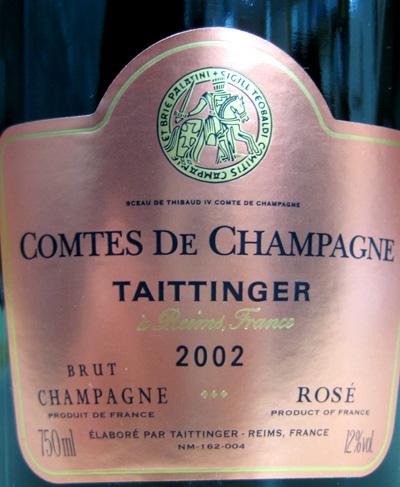 We've tasted no other rose Champagne under $300 that has such decadent, creamy Pinot Noir fruit presented with such energy, finesse, authority and authenticity, aside from perhaps Jacques Selosses almost chewy, monster-rose. The 2002 Comtes Roses magic combination of opulent fruit and riveting electricity makes this Champagne perfect for both Wednesday's celebration as well as for your cellar (more on the age-worthiness of this bottle below).

This tete de cuvee Champagne is not easy to come by in quantities larger than a few bottles and for those of you who already know (or want to learn) the genius of this bottle, we've spent considerable time tracking down some rare back-vintage Comtes for your enjoyment.

As serious as the 2002 Taittinger Comtes Rose is, there is also something truly joyous and over-the-top about it. While the depth of fruit is decidedly lavish, there is no lack of energy to the bottle, no shyness that makes it feel heavy or clumsy. And we're not the only ones to note such a celebratory energy in the Comtes Rose: The world's foremost expert in Champagne, Richard Juhlin, expresses a similar sentiment when he writes about the 1996 Comtes Rose that "It's difficult not to be in a good mood when treated to such a wine."

Since 1995 the house has added a 30% kick of Chardonnay to the Comtes Rose, which probably explains at least some of this energy and the bright flash of citrus on the palate. Still, it is the richness and purity of the red Pinot Noir fruit that absolutely DOMINATES the palate. The black raspberry, cranberry, redcurrant and cherry flavors are simply palate-staining and as rich and broad as the fruit is, there is absolutely no want of structure or lift - a testament to the superb 2002 vintage, the next "great" vintage in line after 1996.

In any event, structure is not a problem for Taittinger's Comtes. Among the scholars of Champagne, Taittinger's Comtes are famous for the heights they reach with age. In fact it was two mind-bending 1976 Taittinger Comtes de Champagnes we drank this year that really brought this bottle to the very front of our mind's eye as one of the great values out there in tete de cuvee Champagne.

Taittinger's 2002 Comtes de Champagne Rose is a wine to seriously consider for the cellar. With age, the fullness and baby fat of the wine in its current state will turn the stage over to a subtle Pinot fruit that showcases more dimension - with all the floral, earth and mineral complexity that entails.

The House of Taittinger
This house, previously known as Forneaux, was bought by the Taittinger family in the late 1930s.

Today the family owns nearly 300 hectares of land in over 30 villages. While the NV "La Brut Francaise" is an extremely competent bottle that proudly establishes the house's rich, creamy style, it is the "Comtes de Champagne" that has made this house famous - this is their top bottling.

The Comtes de Champagne is made exclusively from the best fruit sourced from Cramant, Avize, Oger, Le Mesnil, Chouilly and Pierry. While all other Taittinger wines are fermented in stainless steel, in 1988 the house began to explore fermenting in wooden barrels only with the Comtes. Renown for its decadent, rich, creaminess, the Comtes de Champagne is one of those "insider" bottlings that is appreciated by the Champagne cognoscenti both because of the wines' inherent breadth and complexity, but also because it ages very well and costs (relatively) so little!

Taittinger Comtes
Taittinger's Comtes is one of the rarer tete de cuvee bottlings on the market. Take advantage of our collection. Click here to see our real-time inventory of these bottlings: