The Barolo-like Ballerina at Less than Half the Price!

"When I am asked which wine would I choose were I to be restricted to a single one, my answer is: Carema." - Neal Rosenthal

Strong words from legend-importer Neal Rosenthal (above), especially considering this man has some of the world's greatest wines like Jean-Marie Fourrier's Griotte Chambertin and Ghislaine Barthod's Chambolle-Musigny "Les Cras" at his finger tips!

But also wise words, because few reds have the honest, rustic mountain charm that this has (and the price is crazy-low, see below). If Barolo is a wine of burly tannins and raw power, Carema is a ballerina - silken, perfumed and delicate. Or think of it this way: Carema is to Barolo what Chambolle-Musigny is to Pommard, with all the silky perfume that implies. 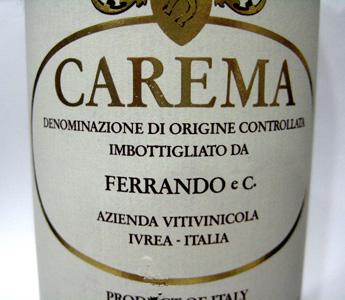 This comparison makes sense - Carema is Barolo's alpine cousin, less than an hour's drive north from Barolo itself, and Ferrando's Etichetta Bianca (white label) is a made from 100% Nebbiolo grown in the shadow of Mont Blanc.

While we've been fans of the Ferrando Carema since we opened nearly 4 years ago, the 2004 edition is special (no surprise, given the acclaim 2004 Barolos and Barbarescos have received). It is a wine of unbelievable purity: As fresh and fragrant as the mountains in spring when they're dotted with flowers, yet so packed with nuances that each smell and taste seems to reveal something new: Cinnamon-tinged cherry fruit, herbs, a dappled and detailed minerality and that absolutely beguiling perfume that only Nebbiolo can delivery.

While the tannins are present and lack nothing in sturdiness, they are not abrasive, rather they are gentle and comforting. The wine is drinking stunningly right now: while your Barolos slumber in the cellar, Ferrando's 2004 Carema is here to fascinate and delight. The wine's approachable tannic structure belies how well this wine will age - 10 years will certainly be no problem. There are many tales of outstanding bottles of Ferrando white label at 15 and even 20+ plus years old.

For you wine geeks and those who follow this bottling: The 2004 may even surpass the incredible 2001. There's something about the warmer 04 vintage seems to have given the wine an extra dimension, without sacrificing at all the mountainlake freshness of this wine.

With the great Barolos and Barbarescos of 2004 really beginning at $55 and working their way up to (and well beyond) $100, this is one of the most glorious, honest and traditional steals of this vintage. (We can go slightly lower for the 6-pack purchase.)

In an ideal world, you'd pull the cork on a bottle right now and then keep at least 2 more in your cellar to watch.

The production of Carema is minuscule: Ferrando produces a mere 120 cases, which in 04 is divided between two different wines (see below). The first tranche imported into the country sold out quickly; the quality of this wine almost dictates that the same thing will happen with this final tranche. Seriously, this wine is flat out too gorgeous to miss.

Please give us the maximum number of bottles you would like and we will allocate as fairly as possible. All orders subject to confirmation. To order, call the store at (212) 980-9463 or click below

Theobaldo Cappellano
1944-2009
Theobaldo Cappellano passed away this past Friday. A longtime fan of his wines, I had the honor of meeting him and drinking with him in the Piedmont in 2006. His intelligence, wit and obvious passion for his vineyards, his wines, were unmistakable and he made a lasting impression. He'll be missed. Click here to read the official tribute to "Baldo" on the Louis-Dressner site.
- Stephen Bitterolf

Carema is one of those places so cool and northern that grapes ripen based on a combination of prayers and the steep terraced vineyards that are ingeniously situated to soak up every last bit of precious sun! This is viticulture at its most heroic and least profitable. However, when the stars align, the region is capable of producing wines of such unique beauty that one feels indebted to the region's growers who remain committed to breaking their backs on steep slopes in near obscurity.

In contrast to Barolo and Barbaresco, where the soils are composed mainly of limestone clay, the soils of Carema are poorer with a large amount of slate. Like the great vineyards of the Rhone, Carema's vineyards are shaped like a bowl, helping to minimize the vines exposure to sunlight while trapping the sun's warmth in the vineyards.

Farming the steep slopes of Carema is labor intensive. The terraces and steepness of the vineyards do not allow machinery to be used. Sadly, the amount of work and cost involved in farming these vineyards coupled with the relatively modest price the wines fetch on the market has caused many people in the region to abandon viticulture. Only sixteen hectares are planted.

In his book Barolo to Valpolicella, Nicholas Belfrage mentions that a mere 500 hectoliters were declared in the 2000 vintage. In normal vintages, Ferrando makes an average of 120 cases between their two Carema's Etichetta Bianca and their reserve Etichetta Nera, which is only produced in the best vintages. (Please note: While we love the Etichetta Nera, which sees some barrel aging, we find the Etichetta Bianca to display more vividly the beauty of Carema and to be more accessible for current drinking.)

Along with the local co-op, Ferrando makes virtually the only Carema commercially available. The Ferrando family has done much to keep the hillsides of Carema planted with vines.