If the past couple of years have been all about the great vintage releases of Burgundy, Champagne and the Piedmont, 2008 has been different (that's probably an understatement). There have been few "golden vintages," aside from 2007 in Germany, and so I've been spending a lot of time going through the cellar and revisiting some back-vintage favorites. With my eye on value as well as terroir, I found myself repeatedly standing in the Chablis section of my cellar.

Within this calm mental framework, my Wine of the Year was a surprisingly easy decision. I simply have not come across a greater, more etched and transparent wine at the under-$100 - Grand Cru Burgundy in every way, shape and form - that remains true to everything I am passionate about in wine: A clarity that speaks of the vineyard from which it came, a purity and concentration of flavor that flaunts rigorous vineyard- and cellar-work and a finesse and balance that can perhaps only be matched by the great Champagnes to the north and the fine Burgundies to the south.

William Fevre's 2004 Chablis Grand Cru Vaudesir is my Wine of the Year. Today, due to some luck and the very savvy buying of my Fine & Rare Director Ian McFadden, I am able to offer this Grand Cru Burgundy at an unbelievably low price! 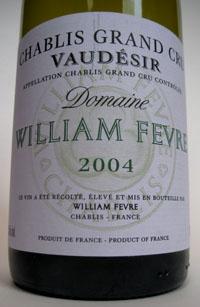 But I don't want to focus solely on the pricing, because the story at William Fèvre over the last 5+ years really deserves the spotlight. Ever since this storied domaine brought in Didier Seguier they have made astounding progress. Vineyard work has become much more stringent. Grand Crus are hand-harvested, yields have dropped and the use of oak has become downright masterful. 2002 presented the estate with the perfect stage on which to showcase these improvements; the wines wowed the critics and announced with flair the return of Fèvre. The 2004s and 2005s are, in my opinion, on the same level and it seems largely a matter of personal taste which vintage one prefers. We have secured an incredible selection of these wines and the prices, across the board, are very sharp - see below.

With this new lineup of Chablis from Fevre, I believe there is now a third producer in the uppermost echelon of this region: Raveneau, Dauvissat and now Fevre. The styles are different: The Fevre Vaudesir ripples with a more forward, more focused energy and even at this young age it is incredibly fun to drink. In contrast, those of you with Raveneau or Dauvissat in the cellar know very well it requires years/decades for these wines to reveal their massive and glorious inner cores.

I would say the tone of the Fevres is also much higher and sharper. The 2004 Vaudesir, even though it is one of the most voluptuous of Chablis' seven Grand Cru sites, is a glass of crashing cymbals, vivid citrus that is full and gushing while remaining incredibly vibrant, with sharp, glossy edges of chalk, dark minerals, polished seashells and dried flowers. The length on the Vaudesir is phenomenal and while the Clos might outperform the Vaudesir in 10 years, at this age the muscular, sinewy elegance and tremendous concentration of the Vaudesir outshines even the grandiosity of the Clos, even considering the significant differential in pricing.

While Fevre's Grand Cru Chablis show better younger than do those of Dauvissat and Raveneau, please keep in mind these are not fragile wines that need to be consumed before the clock strikes 12 - very much the opposite in fact. The 2002s are roaring on, gaining weight and density with age and I believe the 2004s will follow their predecessors. I have provided special 6-pack and 12-pack prices because the 2004 Vaudesir will only improve for years to come.

If my obsession with Champagne can at all be quelled by any another region, it is very likely Chablis that will do it. People often speak of great Champagne as "white Burgundy with bubbles." I think that in the case of top Chablis like Fevre, Raveneau and Dauvissat, perhaps one could half-jokingly say: "These wines drink like Champagne, without bubbles!"

While the lavish white Burgundy's from the Cote d'Or have long since garnered the attention and the prices from the world's collectors, Chablis, even today, remains slightly edged out and because of this it represents tremendous value. Today, at between 30-50% off and well below the lowest price in the nation, the 2004 Fevre Vaudesir is not only my Wine of the Year - it's very likely the deal of the year.

Burghound: "This is aromatically quite a bit riper with peach, pear and subtle exotic notes yet this remains extremely fresh while introducing spicy, rich and full flavors that display a bit of pain grille and vanilla on the big, powerful and punchy finish that goes on and on seemingly without end. This possesses lots of personality and while the Valmur, for all its purity and grace makes for an understated effort, the Vaudesir is far more expressive, indeed showier though by no means vulgar or common. A completely different expression from the Les Clos and Valmur and in short, this is a real stunner of a wine."

Click button below to see our real-time online inventory of Fevre:

Fevre's Chablis Grand Crus
William Fevre is the greatest landholder in Chablis, owning fifteen percent of all the Grand Cru land. Though the domaine has underperformed in the past, two factors have brought it roaring back to the top. 1) Henriot bought the estate and has invested massive amounts of capital. 2) Didier Seguier has taken the helm and enforced rigorous vineyard and cellar practices. All the fruit is picked by hand and put in small, 13kg trays preserving the integrity of the fruit; yields have dropped precipitously and the regiment of new wood has been reduced. Fevre is once again one of the great names in Chablis.

Bougros "Cote de Bouguerots"
Bougros is one of the seven Grand Cru vineyards in Chablis - the "Cote de Bouguerots" is its best parcel, a very steep section at the base of the vineyard that must be hand-harvested. While there are some lackluster Bougros out there, this is the site's prime chunk and it is a wine exceptional in is sappy, dense flavors and focus.

Preuses
The floral side of Chablis - aside from the Valmur with its stony austerity, Preuses is a purist's dream. These are haunting bottles.