Today, we're pleased to offer one of the best red wines of 2007 - a wine that will transcend every other 'Cotes du Rhone' you've ever had: Eric Texier's 2005 Brezeme Pergault VV.

Texier's 2005 Pergault has a shocking combination of elegance and vivaciousness, with shavings of tart red fruit, lean, sinewy cranberry and raspberry, beautiful dried herbs, black olives, smoke, bramble, earth and that oh-so-classic plum-violet-black-pepper-bacon-fat thing that I look for in great Rhone bottlings.

This is the most serious Rhone value on the market today. Texier's 2005 flaunts the depth of this extraordinary vintage and drinks so far above its class it's almost absurd. Today we're thrilled to offer it in two formats - regular bottles and magnums - at the lowest prices in the nation. 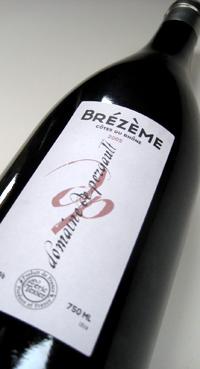 This wine has little if anything to do with your standard Cotes du Rhone. Think of it as a baby Hermitage at a quarter of the price - or a rough and tumble Cornas deeply discounted!

While most Cotes du Rhones sport the fleshiness and rustic heartiness of Grenache, Texier's Pergault VV is 100% Syrah, with much more elegance, but also verve and vibrancy, combining incredible concentration with a mouthfeel that is lighter and more finessed, like 1er Cru Burgundy or Cru Beaujolais.

Eric Texier made a big splash in the wine world in the late 1990s, crafting tiny quantities of Cotes du Rhone from some amazing vineyards in Brezeme - one of the more northerly outcroppings for the Cotes du Rhone appellation.

This special Pergault bottling takes his efforts even higher than the regular Brezeme.... literally! The Pergault VV is sourced from just over an acre of 60-year-old vines (that's about the size of many U.S. backyards!) in a steep, terraced vineyard near the top of a limestone hill.

Old vines in this neck of the Rhone are extremely rare, and in fact their existence is based almost completely on the heroic lifetime efforts of Monsieur Francois Pouchoulin - lovingly considered the "Grandfather of Brezeme" - who saved the vines and continued to cultivate them in relative obscurity.

Comparisons to Hermitage are easy - the sacred granite mound lies just about 20 miles to the north. Both areas are on the eastern side of the Rhone and enjoy treacherous slopes and stunning southern exposures. Cornas, however, may be the more similar brother to Brezeme, as both terroirs are limestone rich.

Fanatics of the great Syrahs of the northern Rhone have probably already heard, and enjoyed, the exploits of Eric Texier in Brezeme; the 2005 Pergault VV is not to be missed. It is a worthy ambassador for this vintage of well-earned fame (you might be aware that a national wine publication selected two 2005 reds from the Rhone as two of its top three 2007 "Wines of the Year").

We're happy to offer a special 6-pack discount; we're also going to place the bottle limit at 6 so that as many of you as possible can steal this old-vine monster and enjoy today
and over the next 5+ years. The magnums in the offering - which are even in more limited supply than the fifths! - provide the ideal aging format and, properly stored, will extend the wine's peak period to a decade++.

For those who have just heard the rumors, or are completely new to this near-forgotten northerly island of Cotes du Rhone, this is definitely a Syrah to put on your dining room table, not to mention in your cellar. Purity, depth, complexity and riveting verve await.

Half a hectare does not make a whole lot of wine so if you are interested in the best value the Rhone has to offer please click below to order the wine, or call the store at (212) 980.9463.