I'm biased. What can I say, for me red Burgundy represents the holy grail.

I believe it's the most ethereal, most elegant, most beguiling wine out there. There's a twisted part of my soul (or is it the good part of my soul?) that only, only wants to drink red Burgundy and shudders anytime anything else is opened up.

So this year, as I thumbed through my memories of the greatest wines of the past 12 months, I was essentially traveling up and down the Cote d'Or. But what a place to explore. The Cote d'Or contains some of the most hallowed villages in wine: Gevrey-Chambertin, Vosne-Romanée and Chambolle-Musigny to name but a few. Given this prestigious landscape, perhaps it's a bit surprising that I've chosen a wine from Savigny-les-Beaune, the "little village that could" in the southern part of the Côte d'Or.

This year, it was a "battle of the Bizes!" While my top pick is the Simon Bize 2006s Savigny-les-Beaune 1er Cru Aux Vergelesses, I have to say it was a drag race between the Vergelesses and Bize's 1er Cru Aux Fourneaux. As the Burghound points out, the entire lineup at Bize in 2006 is extraordinary and both wines are brazen, boundary-stomping old school red Burgundy values that maul other Burgundies at twice the price - even a good number of the 2005s must quiver as these bad boy Bizes approach. While the Vergelesses is Bize's and perhaps Savigny's most elegant, balanced bottling, the Fourneaux is more forward. This is a palate-staining Burg with tremendous gushing concentration and I can't recommend enough grabbing a bottle of this when you scoop up some Vergelesses. (See below for more on the 2006 Aux Fourneaux.)

For Burgundy fans, I believe both wines are "must, MUST buy" Burgs. For those who flirt with red Burgundy or who delight in the expressions of Pinot Noir from around the world, it's time to revisit and re-experience what the grape's homeland is famous for. 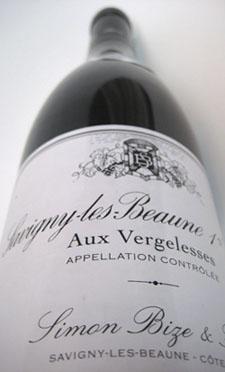 What's most amazing about this wine is that Patrick Bize was able to do in 2006 what he did in 2005. This is one of the few estates that was able to match - and in some cases better - the quality, depth and power of the 2005s in 2006. At least in the case of Simon Bize, the only thing that's decidedly lower in regards to the 2006 is the price. I can't think of a wine that even comes close to the deep, dark fruit and earth-and-flowers complexity that this wine offers up in a muscular, tapered form.

Savigny-les-Beaune is like the Gevrey-Chambertin of the south. The 2006 Aux Vergelesses is a masculine red Burgundy, with a muscular power and firm structure. What is so inspiring about this wine is its richness, a layered fullness that feels energized and suave. As dense and big as this wine is, it is not for a second heavy or clumsy. In fact, it rather smoothly and roundly navigates the palate and finishes off with a lingering comet's tail of super-fine tannin dust. Dark, gamey fruits edged with a bright vivid raspberry and meaty, earthy notes abound with a great core of minerality. If the flavor profile is decidedly less focused just on fruit, New World Pinot Noir fans will appreciate the concentration and heft of this wine.

If the domaine of Simon Bize does not have the most glorious of addresses, there is no lack of history here, see below. Patrick's grandfather Simon was estate-bottling the wines here well before the wars and Patrick, although he never had any formal training, was "tutored" by some of the best - Aubert de Villaine, Henry Jayer, Jacques Seysses, the Marquis d'Angerville and Hubert de Montille. That company makes for quite a birthday party.

This is one of those estates that's tracked by all the serious Burg-heads and Bize is one of my most valuable personal discoveries in the decade that I've been drinking and collecting. Two points should be made crystal clear: I have well over 12 bottles of Simon Bize's 2005s in my cellar, and given the favorable price-point and the absolutely stellar winemaking by Patrick, I will go even longer in 2006. There is certainly the idea that while the 2005s are sturdy beasts meant for the cellar, the 2006s are all drinking lovely right now. While this may be largely true, this is *not* the case for Simon Bize. Most of the 2006 Bize's have quite taut, defined structures and will benefit with aging, if you have the patience.

A note to collectors or those looking to do more research into the great 2006s of Simon Bize: While the Vergelesses is my top pick, as mentioned the Aux Fourneaux is the obvious runner-up and the entire collection here is just undeniable. I *strongly* recommend all his 2006s. See below for more information on the Aux Fourneaux and the other Bize 2006s. If you would like more information, please don't hesitate to ask for help in your email and myself, Mark, Chris, Joe or Stephen will respond directly to you. We're all fans.

As far as the records show, there was a Simon Bize involved in winemaking in Savigny as far back as the late 19th century. The original Bize, so far as we can deduce, was Patrick's great grandfather. Though his father formally retired in 1988, Patrick has been working at his family estate since 1978.

Currently the holdings for Simon Bize are around 22 hectares. Though the vineyard names might not figure as prominently in the halls of Burgundy, these wines are among the most authentic in Burgundy - the entire collection is worth exploring.

2006 Bize Bourgogne Rouge "Perrieres"
In our opinion, one of the Bourgogne Rouge's of the vintage. Simple vibrant Pinot fruit with that integrated old-school Bize earth and mineral. Balanced and so pure. At under $30, stock up. This will be gone soon.

2006 Bize 1er Cru Fourneaux
The runner-up and frankly, this bottle is probably just as deserving of the ultimate crown. If the Vergelesses gets all the attention, the Fourneaux is actually the more plump, ample and gregarious. Incredible depth of juicy fruit. Indeed the Fourneaux is almost always the most plump and ample of Bize's wines and if this doesn't quite have the elegance of the Vergelesses, it has a palate-staining personality that's just lots of fun to crack open.

2006 Bize 1er Cru Les Marconnets
The 2006 Marconnets is lean and mean, great, compact density of fruit-earth with a very prominent core of minerals and exquisite filigree and length. Not wickedly complicated, but beautifully done.

Click button below to see our real-time online inventory of our full 2006 Bize lineup: