Beaujolais has long been the secret haunt of wine geeks, value hunters and even collectors who want fresh, complex, food-friendly reds at very reasonable prices.

There's an honesty and transparency to good Beaujolais that makes it both invigorating and thoughtful. Gulping down a real Beaujolais with some charcuterie is one of this world's finer, humble delights (the French famously, and lovingly, refer to Beaujolais as "gouleyant," which sounds much more sophisticated than "gulpable"), though a Beaujolais can also be sipped and meditated upon as it does a more rustic impersonation of Burgundy's myriad changes in the glass.

Seriously - forget what you know about cheap Beaujolais because the 2006 Desvignes Morgon Cote du Py has more in common with d'Angerville or de Montille than Duboeuf or any of the flower-themed bottles that lurk anonymously in supermarkets nationwide.

First of all, this bottle is special. 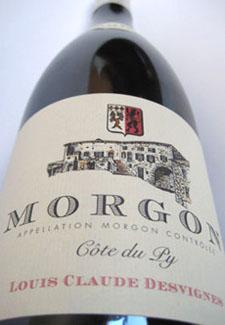 I'd say it's probably the Morgon of the vintage and certainly one of the top wines of 2006 in Beaujolais. If you've had Marcel Lapierre's great Morgon, you know that there is a vivid freshness to the best of the 2006s. What this bottle provides, however, is a complex and broad detail of fruit, a textured richness and concentration (one of Desvignes' signatures) that is missing in so many other 2006s. All this with the freshness and crackling energy that makes many 2006s so mouthwatering and...yes "gouleyant!"

The Desvignes Cote du Py has a broad shoulder of dark and red fruits, blackberry and blueberry providing the key tones balanced by the lighter, more vivid red fruits. There's a wonderful delicate edging of dried herbs and flowers and the delivery has a real life and energy to it - this is the charm of 2006 that is just phenomenal when it's matched to the appropriate concentration. The Desvignes Cote du Py does it better than any other I've had. This wine is drinking beautifully right now and will continue strong for the next 2-5 years easily!

The Desvignes, father Louis-Claude and daughter Claude Emmanuelle, farm only 2 hectares of Morgon's most famous site - the Cote du Py. (Three hectares are farmed in the "Javernieres," a lieu-dit which is bottled separately.) And with their big reputation in France, most is sold at the domaine's door to loyal customers who make the pilgrimage every year to collect their allocation.

While The Art of Eating should be required reading for foodies their profiles on wine regions are some of the best out there. Needless to say the 2004 edition (Number 67) provocatively titled "Beaujolais" is one of our favorites. In this volume, Edward Behr focuses on a few of the top Beaujolais producers, including the Desvignes. This is a tiny estate and though Louis-Claude is still in the vineyards just about all the time, daughter Claude-Emanuelle is more and more in the cellar. The cave is still beneath the 17th-century house and the entire estate consists of only 13 hectares.

The Cote du Py is probably Morgon's most famous site - the wines from this slope are most usually richer, with fuller, more developed fruit. The Desvigne's tiny piece of "the Py" is largely granite and schist and even in leaner vintages like 2006, they are able to craft wines of great concentration with ripe tannins and great structure. This is just a beautiful bottle of wine and I wish there was more to go around.