One of the Most Exciting New Addresses in California

Do you have preconceptions about California winemaking?

Go ahead and forget 'em all because the Bedrock Wine Company is doing things differently. This is easily one of the most exciting new wineries we've come across: all California wine fans should pay heed.

While forgotten vineyards with 100-120 year-old vines and the old-school winemaking may be enough to seduce you, these two wines also represent a serious philosophical challenge to agricultural monotony. 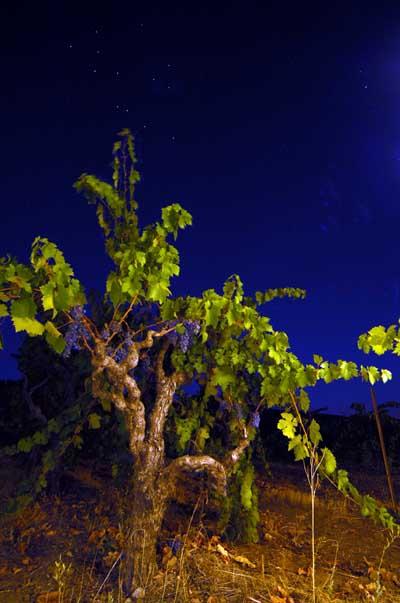 We call into question the system of clean vineyard division:, where each varietal has an individual place: the Cabernet vineyard goes here, the Merlot there, and the Zinfandel...well, put that someplace else altogether. If straight lines and sharp edges make vineyards (not to mention farms) look like big green checkerboard quilts spreading out mile after square mile, today's offer is a celebration of winding paths and glorious chaos.

Today we offer two "field blends" that will gush across your palate in a California fireworks show of aromatics, an avalanche of crushed red berries, black berries, roasted coffee notes, bramble, a dash of pepper all underlined by earth and minerals. These are wines with tremendous energy, gusto and life...unfurling joyously with fine acidity and structure. (See full tasting notes below.)

Both of these bottlings, "Heirloom" cuvees from the Bedrock and Lorenzo's Vineyards, are sourced from old vineyards planted with a happy, slap-dash of grapes: Zinfandel, Carignan, Petite Sirah, Syrah, Barbera along with a few other grapes long forgotten about or present in quantities too tiny to measure. (Learn to enjoy the mystery.)

A dash of history is helpful here because there's a method to the madness: "Field blends" were historically used to protect the farmer and the winemaker. Biodiversity is, after all, a good thing and if for whatever reason the Zinfandel didn't do well one year, or a bug came along with a predilection for Petit Sirah, well, at least part of the year's crop would come through.

But there's also a school of thought, maybe a bit romantic, that also believes such field blends allow the vineyard to speak in a more "whole" form, allowing the same terroir to speak in many different languages, creating wines with a broader complexity, more personality, more charm. (After all, who do you want to sit next to at the dinner party - a Barbie or Ken doll, static in their symmetrical perfection, or the quirky uncle with his long rambling stories?)

Both of the Bedrock wines strongly support the argument that there is something to old field blends, that there is a passive wisdom in letting mother nature play orchestra manager to the symphony of grapes and vines before her.

Alas, most vintners have had other ideas over the last 100+ years and many old-vine field-blend vineyards were torn up, sacrificed to the "noble" (mono)varietal of the day - from Cabernet to Chardonnay to Merlot to Pinot Noir.

Luckily, a few California producers - like Morgan at Bedrock - have fought to save the few remaining "time-capsule" vineyards of California. If the field blend has fallen out of popular wine culture it's a shame, but we're lucky a few curious folk have managed to save a bit of this legacy.

Both of these wines are must tries for the curious, for the California aficionado. Zin-lovers especially must not miss these wines. And fans of Chateauneufs and the great reds of southern France will also do well to explore -- a bottle or two of Bedrock will maybe make the wait for the 2007 Chateauneufs not seem as long!

In any event, we'd recommend trying the Bedrock "Heirloom" cuvees before the hype (and the prices) build - the critics have already publicly commented on the wines and the reviews will be published in the coming months as the wines make their way onto the market for the first time.

Production, as you'd guess, is tiny, with a combined output that doesn't even total 300 cases. Compare these wines to the other old-vine single-vineyard Zins out there, like Turley or Carlisle which run in the $50-$100 range, and the Bedrock wines instantly become a top value in California wine under $35 a bottle.

With these statistics in mind, you can probably gather that our allocation from the winery was small, so please order by calling the store at (212) 980-9463 or clicking below.

Click button below to see our real-time online inventory of 2007 Bedrock: 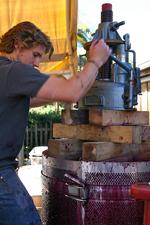 Morgan Twain Peterson was born and raised in Zinfandel country in Sonoma, California. The son of Ravenswood founder and winemaker Joel Peterson; there's a winemaking legacy here that runs deep.

Needless to say it would have been all to easy too fall into the ranks and go the corporate route, but instead he returned to his roots in Sonoma to make the wines he wants from the grapes he grew up with. Bedrock is a small operation functioning out of an old converted chicken coop.

This is basically a one man operation, with the occasional reliance on a friend. Both of the "Heirloom wines" are pitchforked by hand into the small Italian destemmers where they are then gently pumped into open top fermenters which lie outside under the clouds, sun and stars until they finish their fermentations. For some of the wine, he uses open top redwood fermenters which is all but unheard of in California these days. Punch downs are done by hand and the wine is pressed using a manual basket press which may be messy and time consuming but allows for the best control over extraction.

Bedrock Vineyard
The 152-acre Bedrock vineyard from which the winery owes its name was planted over a 150 years ago and is among the most historic vineyards in California. The old vines that he meticulously selects for the Heirloom bottling muster up only enough concentrated juice for 185 cases.

Lorenzo's Vineyard
The exact vineyard source here is a secret for the time being - though we do know it is located on the "bench" of Dry Creek in Sonoma. Instead of the exact vineyard designation, the wine is dedicated to the Grandfather of the family who tends to the 100+ year-old vines - Lorenzo. This wine is certainly is a different beast from the Bedrock - it is the powerhouse of the two.