That's what I blurted out, awkwardly, at a small, late night staff tasting last Wednesday, after having Caloz's 2007 Heida-Paien "Les Bernunes" for the first time. Joe was showing some of his new finds/obsessions to the staff and this one struck me, immediately, as one of the more unique white wines I've had in a long, long time. This is so good, and our price so compelling, that if quantities allowed this would have been a sure contender for a "Friday Steal."

The 07 Caloz holds within its considerable frame all the *extreme* contradictions (or apparent contradictions) of its terroir. This is Savagnin from high-altitude vineyards, mountaintops in fact - yet it is dense with ripe, honeyed fruits, sweet flowers and the sunny, drippingly golden notes you'd expect from the fertile fields of the Rhône. This is the "flowers" part of my comment above. 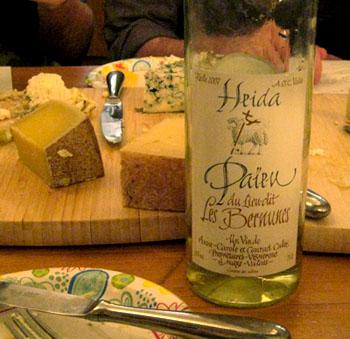 Yet it is also cut. This wine is "post-mineral" - as if a stony landscape of alpine rocks had been detonated, and the midpalate had collected this super-fine boulder dust. There is without a doubt a smoky, flinty, gun smoke quality to this wine. This is the "fireworks" part of my comment.

Intrigued yet? You should be and today we put this beautifully eccentric, high-altitude, non-oxidative Savagnin from Switzerland's Valais region on center stage, working as lean as we possibly can in an effort to tempt you to put a bottle on your table (and a few in the cellar).

This is a sneaky, complicated wine. Even in the glass it's hard to pin down and as wickedly fascinating as it is, do not be intimidated. This is not an unfriendly bottle at all and part of its uncanny charm is that it's in fact a juicy, tasty, mouthwatering sort of wine. Still, it is hard to put into context.

Fans of the Jura should obviously feel it their duty to try this Swiss mountain cousin, though you'll find only a faint echo of the jarring, nutty acidity and salty twang of many Jura whites. This is not an oxidized wine and so has nothing to do with Vin Jaune or even the more humble Cotes du Jura. The rich, sweet-flowered, honey-laden fruit is in fact exceedingly Rhone-ish, even Condrieu-like though with more masculine, Chablis-like smoke and flint.

Is this a wine that marries the smoke and flint purity of Chablis with the ripe, luscious flower-and-melon notes of the south? Sort of, yeah. That is, in any event, just about the best I got. Like I said, this is a difficult little Rubic's cube of a wine.

The terroir here deserves a quick mention because it is extreme. The Valais is located in Switzerland's southwest and it sports some of the highest vineyards in the world - at altitudes of up to 3,600 feet. Some sort of confluence of conditions that I don't really understand (Joe explains it all below) cause the temperatures to be higher than you'd expect - the Valais is sometimes referred to by the denizens of Europe as the "California of Switzerland!" Aside from a few, wickedly steep terraced vineyards - all, out of necessity, facing perfectly south - one can also apparently stumble upon cacti and lizards, sunning themselves on the alpine rocks. Strange indeed.

We tip our hats to importer Neal Rosenthal for another glorious find in the wilds of the wine world. Fernand Caloz founded the estate in the 1960s though it is now run by his son Conrad and his wife Anne-Carole. The "Les Bernunes" vineyard is located on the hillside between the town of Sierre and the village of Salquenen, for those Swiss geography experts. The vineyard is one of the oldest and most esteemed in the Valais, with the steep angles and terraces that make vine-growing possible, if not still a bit precarious.

Though it feels mildly ludicrous to suggest that Caloz is going to be the next big thing, it also feels unlikely (and/or just plain wrong!) that a wine with this unique and beautiful of a signature won't make an impression, slowly, on the considered palates of the world. Rosenthal, after all, has a long list of producers who came out of nowhere to become obsessions of the wine-collecting cognoscenti - consider Paulo Bea, Levet, Pradeaux, Chateau Simone, Montevertine, etc.

We have locked up the entire parcel of 2007 Caloz currently in the U.S. and today's price disappears with the wine itself. The response to our off-the-beaten-track offerings has been very strong of late (thank you!) and so if you are interested in the 2007 Caloz call the store at (212) 980-9463 or click below to order.

The California of Switzerland: Valais

The Valais region is located in southwestern Switzerland and marks the upper portion of the Rhone River. The region accounts for 40% of total Swiss wine production and is arguably its finest wine growing area. The combination of south facing vineyard, many of which are terraced, the fohn (warm winds originating in the Mediterranean) and the 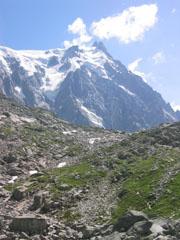 sheltering effects of the Alps give this region a surprising heat and warmth - it is often called "the California of Switzerland." Vineyards can see a whopping 2,500 hours of yearly sunlight. Lizards and cacti are common sights in the region's backbreakingly steep slopes, which can reach an 85% gradient.

Valais’ vineyards, along with being sun-soaked and impossibly steep, also reach toward the clouds; altitudes range from 750 to 1,100 meters. At 1,100 meters, the Viperterninen vineyard is thought to be the highest winemaking site in Europe. The sheltering Alps also severely restrict rainfall making Valais the driest of Swiss wine regions, often making irrigation crucial. The Alps have also made Valais somewhat isolated. This has allowed indigenous grapes to continue to flourish. Chesselas, Switzerlands most planted grapes, accounts for 30% of the plantings in Valais compared to 60% in Switzerland as a whole. This is rounded out by a cast of lesser known grapes. Petit Arvine, Amigne, Cornalin, and Humagne Rouge and Blanc are the highest profile, but a cast including Heida, Himbertscha, Lafnetscha and numerous others continue to be grown. The soils of Valais are quite varied. They range from richer alluvial soils on the plains to chalky and rocky soils as you move up the Rhone river. The area around Sierra and Miege where Caloz's vineyards are located have a high portion of shale in the soils. (The photograph, above, was taken from the slopes above Chamonix, and seems to me evocative of the place and the wine, in spirit if not in exact geography - Chamonix is about 30 or so miles from the Valais' mountaintop vineyards.)

The Story of a Grape: Heida

Heida is also known in the Valais by its French name, Paien - thus the "Heida-Paien" on the label. Heida goes by Savagnin in the Jura and Gringet in the Savoie. DNA testing has revealed the grape to be a relative of Traminer which was once widely planted throughout Germany, Italy, Alsace, Hungary, and Austria. The history of Heida in the Valais goes far back. The first documented mention of the grape occurs in 1586, but the grape's history is likely much older than that. Heida in the local dialect means ancient and Paien is French for Pagan, both lead people to speculate that the grape's history on these soils is very old. The grape is typically planted at high altitudes; it's most famous location is the already mentioned Viperterninen vineyard that's 1,100 meters. Heida responds to these conditions by exhibiting intense rocky minerality, floral notes, honey, and luscious fruits.