Lowest Price in the Nation!

Today, the flagship wine from Pegau, the 2007 Chateauneuf-du-Pape Cuvée Réservée, from what is shaping up to be the vintage of a lifetime at the lowest price in the nation. 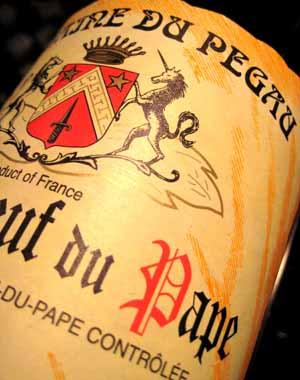 This is likely to be one of our final 2007 Rhone offerings and we feel good about "closing the book" with Pegau's awesome Reservee. Few bottles elicit the kind of visceral, mouthwatering reaction from wine lovers that Pegau's Réservée garners. (Parker's quote, above, references this quality.) In the last 20 years or so, under the direction of Laurence Feraud, Pegau has gone from strength to strength and every vintage seems to ratchet up the quality one more serious notch.

For 2007, all the wines at Pegau deserve blockbuster status though for us the Cuvee Reservee is a triumph of both quality and value. There's no doubt in my mind this is destined to be one of the top Reservees to emerge since the awesome 1990. This is one of the elite 2007 Chateauneufs you're going to want in your cellar.

The magic of the Cuvee Reservee is maybe hard to describe without indulging a bit in cliches, but in top vintages the Reservee conveys something of Southern France that is seemingly tangible. It is exceedingly floral, with a perfume of swirling flowers, a field of sun-roasted herbs all poised prominently over a palate dappled generously with minerals and stones.

For me, what separates Pegau from so many other great producers in the Rhone is the perfection of the underlying balance: Gorgeous, luxurious fruit though disciplined by a rigorous structure. The Reservee has plenty of energy on the palate, though it isn't in the least bit inelegant; indeed this is one of those rare Rhones that dances across the palate with finesse, while crushing your palate with concentration.

The charming and gregarious Laurence Feraud is one of the all-stars of the wine world. She is without a doubt on the short list of the most important women in winemaking. Since her father Paul began to hand over more and more responsibility, the Chateauneufs from Pegau have been nothing short of extraordinary. (It should be mentioned that the wines her father crafted were hardly lackluster!)

While many people covet the super Cuvee da Capo from Pegau, I believe the true value at this estate rests with the Cuvee Reservee.

I am confident the 2007 edition has all the stuffing and structure to improve for 20 years or more, but in most vintages the Reservee tends never to shut down completely - there is no awkward adolescence here. Chalk this up as just another reason why serious collectors and casual wine lovers seem to go through cases and cases of the Pegau Reservee, though the fact that it isn't a $150 a bottle also helps!

We've secured but one parcel at this price - if we can find any more it's most likely to be in the $85+ range. Special 6-pack pricing has been crafted for you collectors, though please do respond as quickly as possible if you're interested because we expect to sell out quickly. To order, please call (212) 980-9463. Give us your maximum number of bottles you're interested in and we'll allocate accordingly.