It seems like 2009 may be the year that Beaujolais overcomes its perennial image problems and finally gets some of its due respect.

Indeed, from our vantage point, real Cru Beaujolais is at the tipping point. While the top wines have been sought out by wine geeks for years, this spring has marked the first time we've received so many inquiries from top Burgundy collectors who seem to have 2009 Beaujolais on their radar right alongside the impending 2009 red Burgs.

It all started last winter, when there were rumblings that something very special had happened in Beaujolais with the 2009 vintage. We've seen stellar Beaujolais vintages in 99, 02 and 05, but these were not the vintages growers were citing; it was past-century greats stretching far back to 1947, 1949, 1976 and 1991.

When I left for my Beaujolais tour the second week of July, the 2009s were just arriving stateside. I had only tasted Lapierre’s superlative 09 Morgon. Still, I was worried that I would be heading into the second coming of 1997 in Tuscany, instead of the vintage of a lifetime.

In short... I wasn’t, and 09 Beaujolais does indeed seem like a very special vintage.

On my first day, after tastings with Pierre Chermette at Domaine Vissoux and Jean-Paul Brun, I visited Eric Texier, who lives in Beaujolais (though he makes wine in the Rhône). Texier’s perfect English and keen intelligence always sheds welcome light on wine matters. When I commented that all the 09s I’d tasted from Vissoux and Brun as well as his Rhônes were round and ripe but not at all shy when it came to minerality or acidity, he replied that it was a vintage “that really has everything.”

I couldn’t agree more. What we have in 2009 are deep, majestic Beaujolais that combine grandeur with elegance, wines rich in tannins, round, with velvety textures and seductive turns, all saturated with granite allusions. Quite simply, they’re complete wines.

Unlike the 05s, which were skeletal and, at times, downright angry, the 2009s are delicious now. A good game plan is to buy deep: Set aside some to drink now and hide the rest. You’ll be tempted to drink these up early. And another thing: For all their concentration and ripeness, the 09s are rarely fatiguing. I was traveling through Beaujolais in a heat wave, and seldom did I find drinking the wines to be work - something that running through 90 barrel samples in under 4 hours certainly can be. Believe me; I drank a lot of Beaujolais, too. I doubt there’s a place in the world where winemakers like to drink their own wine as much as they do in Beaujolais!

When you read older books, like Curnonsky's Traditional Recipes of the Provinces of France, you always read that Beaujolais is a wine to drink young except in exceptional vintages. From all current accounts, 09 is just such a vintage; some of the wines seem destined to still be drinking well on their 20th birthdays.

The growers that I spoke with were simply in awe of the vintage. Pierre Chermette evoked the 1947, 49, and 76 trinity of vintages as a quality comparison. For Alain Coudert of Clos de la Roilette, it was the best he’s seen since 91, which apparently wasn’t a uniformly great vintage but where it was good, it was smoking good. Jean-Paul Brun simply said that 2009 was “the best quality he’s ever seen. Nearly perfect.”

The pristine quality of fruit was the recurring theme in my conversations with winemakers. Nearly everyone commented that virtually no triage was required. As a point of comparison, in the difficult 08 vintage Coudert had to sort out around 40% of the grapes, and for Desvignes in Morgon it was 50% of 08’s crop, whereas in 09 Coudert reported 98% of the grapes were good, and at Desvignes there was very little need to sort anything.

Besides a little bit of drought stress and hail, both of which helped to reduce yields, the vintage seems to have progressed in ideal fashion. There was some rain in June and July, August was sunny and dry with just enough rain to prevent any major drought issues, and September was perfect.

All the growers reported what they referred to as a “sunny vintage” with plenty of ripeness. While a grower or two said that they wished they had begun harvest a couple days earlier, none reported overly mature grapes, nor did I taste much that had crossed over into this realm. The word that I heard again and again from winemakers about the 09 was “equilibrium.” Nearly all of them were quite impressed by the harmonious weaving of fruit, acid and supple tannins on display.

Of course, nothing is that easy. 2009 isn’t without problems. Sometimes the alcohol does get a bit high. For the Crus, alcohol levels for finished wines seemed to be in the 13.5-14% range (normal in Beaujolais runs about 12.5-13.5%), though certain parcels came in even higher.

Sometimes a touch of heat could be detected in Crus that are known for being more on the fruity, less structured side - like Brouilly and Regnie. I tasted great wines from nearly every Cru, though it does seem like Moulin-à-Vent and the sections of Fleurie that rub shoulders with it may be the sweet spots of the vintage. The warm vintage seems to have added an extra dimension of complexity and breed to these particular wines. With that said, though, sign me up for a case of Lapierre Morgon and Metras Fleurie, which comes from grapes in the heart of Fleurie. I may give a kidney for some of Metras’ impossible-to-find Ultime in 09 as well... do tell me if you come across some.

For many growers, quantities are down considerably, so don’t hesitate on pulling the trigger. Hail seriously reduced some yields. Michel Tête, in Julienas, is keen on pulling out a newspaper with pictures of hail nearly the size of apples. Hail reduced yields at Desvignes to 25hl/ha, and in her high elevation vineyard in Fleurie, Julie Balagny’s crop was reduced by hail to a tiny 20-25hl/ha.

During our tasting, Mathieu Lapierre mentioned that the yeasts that cause volatile acidity (VA) seem more prevalent in warm vintages. I heard from many producers that they and others were "freaking out" during the initial stages of fermentation when lab reports showed high levels of VA. Thankfully, the good yeasts won out, and VA levels stagnated. I seldom encountered VA problems through my tastings.

Jean-Paul Thevenet reported that he chose to use a semi-carbonic maceration instead of his usual full carbonic maceration in order to quicken fermentation to prevent harmful yeasts from gaining the upper hand. He said that he made the decision once he saw the fruit and was reminded of 05 and worried about bacterial problems. For those who remember his 05s, he definitely prevented a repeat performance in 09.

In sum, 09 is a vintage for which to clear space in your cellar. The level of concentration, elegance and effortless balance of the vintage isn’t something that’s likely to repeat itself anytime soon. While in Beaujolais, I tasted a bunch of wines that were aged between ten to fifteen years that showed plenty of youthful vigor. Last year at the store we opened up a 1964 Morgon that was simply gorgeous, still very fresh and floral. Trying to predict the trajectory of a vintage is nearly impossible, but here Bobby, Chris, Stephen and myself are squirreling away cases with high expectations. 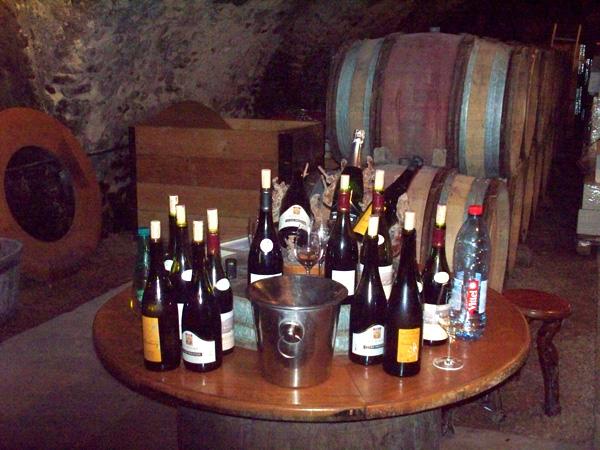