It's been over two years since we introduced Lauer to the U.S. with the following line: "THE German discovery of the year."

Since then, Lauer has "gone cult" as one very knowledgeable insider put it. Good for Florian Lauer honestly - he deserves the recognition. The wines deserve the recognition.

Today, just days away from the holiday, we introduce a new bottling from the estate, the "Neuenbersch." We first heard about this new wine last fall; initial tasting reports put it right up there next to the Schonfels. Obviously we bought it all - today we offer out the final 64 bottles.

The truth is I really wanted to write a wine-epic for this bottle, for Lauer - but the store has been on overdrive for the last two weeks, inundated with holiday gift orders and walk-in traffic. So yesterday, I emailed Dan Melia of Mosel Wine Merchant and sort of begged him to write something up on the bottling. I was going to take what he wrote and just quickly spin it into a little email... but then a few things happened.

First, Raj Vaidya of Restaurant Daniel walked in and as he is a huge Riesling fan, I figured I'd open a bottle for him. We tasted. It was good - VERY good. Raj bought two; I upped my order from 3 to 6.

Then, Dan emailed me his information and it was already more coherent and concise than anything I could put together, so I figured I'd just cut and paste it nearly 100% and pass it on.

The short story is that this is a GREAT Riesling and if we sell NONE, that's fine with me - I'll drink it all (eventually). The full story is below.

Thank you so much for your support this year and have a beautiful holiday! 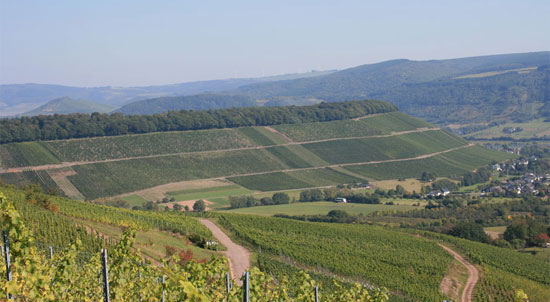 "This is a wine that has never before existed from Lauer. It's like - and pardon the late '70s reference - already having Beggars Banquet and Sticky Fingers and Exile On Main Street, and then all of a sudden Some Girls is there, and you can't quite believe it. You thought the good stuff had already been maxed out.

Neuenberg (it's named Neuenbersch on the label, just like Unterstenbersch, because "Neuenberg" is a pre-1971 registered place name and so can't be used on the bottle; using the dialect ending "bersch" is the Lauer's way around the law) is historically among the most important, most valued of all the various parcels of Ayler Kupp. On the tax map from 1832 "Neuberg" is the only name mentioned in Ayl. It gets (surprise) confusing from there. What was in 1832 called Neuenberg is by 1897 seemingly referred to as Herrenberg (Neuenberg is still listed on late-19th-century maps, but it seems to be getting pushed ever further to the west of the Kupp). Even Florian doesn't know the ins and outs of why the names were changed over time. In any case, the parcel from which 2010 Neuenbersch comes is today referred to by people from Ayl as "Neuenberg," so Florian stuck with that name. Whatever its name over time, it's right in the heart of the Kupp, the large middle section of the hillside, south/southwest facing - really some of the best that the Kupp has to offer.

So why only make the wine now? Because the vines were planted only 20 years ago (previous vines were knocked out by phylloxera), and it is only as of 2010 that Florian thinks they are bringing the complexity and extract that make for a wine that is up to par with the site's historical reputation. (Previously the fruit from these vines went toward Fass 2.) And the wine does indeed bring a lot of power. (Even still, among the 2010 trio of Kupp '56, Schonfels, and Neuenbersch, my early impression was that this wine offers the most finesse and filigree.) The mineral drive is real, the fruit is not bashful, and I'm sure that it's a wine that will reward time in the cellar.

It was picked at the very end of October, with 100 Oechsle, and finished with 13 grams of residual sugar (so, by Lauer standards, that's called "trocken/feinherb")and about 8 grams of acidity (rather low for the vintage - obviously quite healthy otherwise - probably a result of 12-hour skin contact and, I believe, malo). Yields were very low, I think around 23hl/ha, though of course yields were quite low (for top growers) vintage-wide.

The vines were planted by Florian's father, Peter, with the expectation that Florian would one day be able to capitalize on the greatness of the site in a way that Peter was not. In some capacity, the vines themselves were "cellared" for 20 years so that Florian would be able to work with them once they had achieved appropriate "ripeness" (I don't mean that literally, obviously).

I hope this is helpful. Obviously if you've got questions, or if any of this is unclear, just let me know. Thanks guys, Dan."