The 2006 Veranda Pinot Noir is without a doubt the best Pinot Noir under $20 I've tasted since we opened our doors almost four years ago. Frankly, this bottle may have the present-day world title.

This is Pinot with a mouthful of juicy cherry and raspberry fruit darkened and structured extremely well. It has NONE of that sappy, sweetness that afflicts all too many inexpensive California and Oregon Pinots. Veranda's balance and hedonism will satisfy those who like "dry" and those looking for something "fruity" - those of you on the endless search for something "smooth" will be just as delighted as those who looking for "complex." Think of this wine as the bass and soul of Barry White combined with the sultry gloss of Alison Krauss and the power yet intricacy and widespread listen-ability of Led Zeppelin IV. (That's right!) 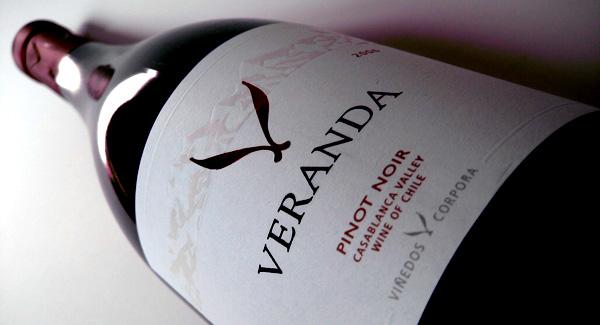 "Great, affordable Pinot Noir" is the #1 request we hear from our customers. Quality everyday Pinot has always been a rarity given the difficulties associated with cultivating the notoriously finicky grape, but the words "affordable Pinot" have recently been made a complete oxymoron by weakening US currency and absolutely surging demand. Yes, you can find cheap Pinot, but it almost always tastes exactly like, well, cheap Pinot.

We relentlessly taste nearly every Pinot that makes it to the market. While it's a tiring and often fruitless search (pun intended), it occasionally results in an absolute gem of a find, like Veranda.

As many of you know I take my job as "Crush Hedonism Co-Chair" (Ian is the other Co-Chair) and "Inexpensive Wine-Finder" seriously, but recently I faced added pressure when I was called on to select and ship wine out to Seattle for a family wedding. With my reputation on the line in front of 200 family members and friends, I chose to subject Veranda to the ultimate taste-test as the only red wine to be poured.

The group is notoriously picky, but 8 cases (barely) satisfied the thirsty crowd! It was consumed both as a cocktail wine and paired well with all 3 entrees. If Veranda can pass muster in such a high pressure matrimonial environment for a group of family foodies, imagine what it can do at your dinner party or a romantic night in. Luckily it will also provide appropriate fuel for the BYOB karaoke event you've been planning for weeks and/or just the consoling on the couch you need after yelling at the TV for an hour during the Vice Presidential debate.

Those of you who are generally "Old World"-only types will want to be moderate in your purchasing. While Pascal Marchand (Comte Armand, Domaine de la Vougerie) is involved in making the wine, and there is a certain tip-of-the-hat to Burgundy, Veranda is assuredly "New World" in style. To my fellow hedonists: You will be absolutely thrilled and should not hesitate to purchase with wild abandon.

2006 was an excellent vintage for Marchand and the folks at Veranda. I would have usually waited for a November offering (think turkey!), this was also a serious contender for my Wine of the Year, but I don't know if quantities will last long enough. (Roughly half as much as the limited Layer Cake were imported.) Only a few pallets were available for the entire East Coast and at least half of this has already been sold to a few upscale NYC restaurants who are flying through it as a $15 glass pour!