"The charm of the Jura and its wines come from the sense that time has grown genuinely mossy and amnesiac here. Small vineyards, old vines, curious grape varieties seen and tasted nowhere else, vinification methods that would be regarded as obtuse or mad by the oenological conformists who pass judgment at international wine shows. If you are one of those people who long to escape from the shallowness and tedium of wine fashion, then the Jura is for you." Andrew Jefford, The New France

France's Jura is truly one of the final frontiers of wine. You may be 50 miles east of the Cote d'Or, the beating heart of Burgundy (near the border with Switzerland), but you might as well be in a galaxy far, far away from modern wine tastes. If today a handful of grapes hold nearly despotic sway over people's palates and the world's wine styles all seem to be marching, lemming like, off a cliff into some homogeneous ocean where everything looks and tastes the same, well, the wines of the Jura are absurd and eccentric, unique and invigorating and extraordinary values in the context of the long-lived complex wines that they are. 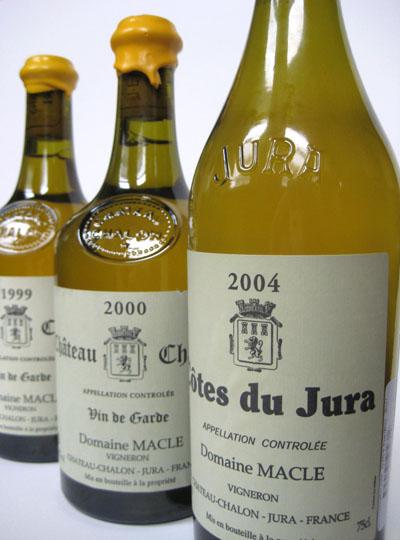 The Jura, France's smallest wine region, is famous for its delicious Comte cheese and its bucolic surroundings - inviting mountain streams, lakes, lush green pastures dotted with wild flowers, that sort of thing. Make no mistake, however: The wines of this tiny region are their own animal. They are misunderstood, maligned and not widely imported - but these bottles are the rare artifacts of one of the world's most singular food and wine cultures and we really believe that as the big arm of globalization makes everything look (and taste) the same, there is more and more pleasure to be had in the unique. Push your brain and your palate somewhere new! While the savory, gamey reds and oxidized whites of the Jura present flavor-profiles that are almost jarring the first time you experience them, there is so much depth and personality here that *anyone* with an open mind and a curiosity will appreciate the brazen splash into the unknown.

Oxidation. This is the first (and certainly the greatest) hurdle that wine drinkers most traverse to understand - to come to peace with - the wines of the Jura. Many of this region's white wines are made, very intentionally, in an oxidative manner. This oxidation (which really just means an exposure to air during, and after, the fermentation) gives the wines their radical complexity. At first taste, you might very well recoil and say (pejoratively), "this tastes like sherry." However, after getting better acquainted with the style, the differences between the oxidized whites of the Jura (among which Vin Jaune is the most famous) and Sherry become immediately apparent. Once acclimated to the wines, it's also pretty easy to become enamored with them. The best examples deliver the concentration, depth, complexity and ageworthiness of a great wine. The flavor profiles range from apples to citrus, nuts, spice, toffee, and moist earthy notes of moss and soil that evoke the surrounding bucolic pastures and forests.

Vin Jaune. The sheer singularity and importance of Vin Jaune nearly requires that it be covered first. Once you've tackled Vin Jaune, its oxidative brethren and everything else is relatively easy to comprehend, both intellectually and in terms of taste.

Vin Jaune literally means "yellow wine" and the term refers very specifically to an oxidized wine coming from certain regions within the Jura made solely from the Savagnin grape. Vin Jaune flies in the face of viticultural orthodoxy. While Vin Jaune is fermented like any other wine, this is just the beginning. After the fermentation, the wine is stored in large barrels that are never completely filled and are basically abandoned (meaning they are not filled up or topped off, allowing air to come into contact with the surface of the wine - this is the oxidation!) for a minimum of 6 years and 3 months. A tremendous amount of wine evaporates during this time; legend has it in the Jura that the squat 620ml bottles that Vin Jaune comes in - called clavelins - contains all the wine that remains after a liter of wine after its journey.

At the beginning of the aging process, a thin veil of yeast cells forms, protecting the wine from severe oxidation - in French the oxidative wines of the Jura are referred to as "sous voile" or "under a veil." The rejection rate of Vin Jaunes varies from anywhere between 25%-75%. Acetic acid, the dominant acid in vinegar, is one of the most frequent causes of rejection. That said, if a barrel of Vin Jaune emerges alive from its slumber of 6 years and 3 months (or more), it's nearly indestructible. Bottles of Vin Jaune are capable of aging well over 100 years; young bottles can last up to two weeks after being opened.

Vin Jaune itself can be made in various regions within the Jura such as Etoile, Arbois, Cotes du Jura and Chateau Chalon. Chateau Chalon, however, can only make Vin Jaunes and these wines are by far the most renowned Vin Jaunes. The exposition in Chateau Chalon is perfectly south and south-east and the soils are composed of limestone that has chipped away from the dramatic cliffs that surround the village.

The wines of Chateau Chalon have had many illustrious admirers throughout history. In The Food of France, Waverly Root mentions that Chateau Chalon was a Roman favorite. Root goes on to list other admirers, which includes Rabelais, Francis I, Metternich, and Henry IV. The famous Prince of Gastronomes, Curnonsky, included Chateau Chalon in his list of the five best French white wines along with Yquem, Montrachet, Chateau Grillet, and Coulee de Serrant. During our times, none other than Jancis Robinson has referred to the Savagnin grape as "indisputably noble."

Beyond Vin Jaune. However, there's much more to Jura wine than Chateau Chalon, Vin Jaune, and the Savagnin grape. The region's most planted white grape is Chardonnay, which it shares with neighboring Burgundy. Chardonnay is used in the region's fine cremants (sparkling wines). Both Savagnin and Chardonnay appear in two guises as still wines: as the oxidative or "sous voile' wines and as normal, non-oxidative wines. The two grapes are frequently blended together, as they are for most vintages of Macle's Cotes du Jura. Certain areas of the Jura have proved to themselves more apt for making both "sous voile" and non-oxidative wines. Chateau Chalon and the area surrounding it along with Etoile in the center of the Jura make the most finessed and mineral "sous voile" wines. Both Macle in Chateau Chalon and Domaine Montbourgeu in Etoile illustrate the mineral elegance that the areas are capable of.

Red Jura. The Jura is also planted with three red grapes: Pinot Noir, Trousseau, and Poulsard. Poulsard (sometimes spelled Plousard on wines from the village of Pupillon) struggles and ultimately fails to become a full-fledged red. The locals use the more apt "coral" to describe the color of the wine. Poulsard pairs wonderfully with the region's charcuterie. There is an earthy cranberry tartness along with a fresh acidity. The region's sturdiest grape is Trousseau. With gamey, spicy, and red currant flavors; Trousseau is the favorite wine to pair with the region's hearty game dishes. Because of its weight, Trousseau is often blended with Poulsard or Pinot Noir for added heft. Trousseau is the longest lived of Jura reds. Pinot Noir presents itself as a slightly anemic Burgundy. The Pinot Noirs make up for what it has lost in power with an interesting spiciness and refreshing tart fruit, not to mention the occasional floral notes and slight smokiness. The area around Arbois has the reputation of producing Jura's best reds while the village of Montigny-les-Asures is thought as producing the best Trousseau and Pupillon is best known for Poulsard. The reds of Puffeney and Overnoy certainly legitimize such a claim.

The other regional oddity from the Jura is Vin de Paille or "straw wine." Unlike Vin Jaune, Vin de Paille is made in number of France's wine regions though in the Jura it is encountered far less often than Vin Jaune. Traditionally, Vin de Paille was made by laying grapes out on straw mats to dry the grapes and concentrate the grape's sugars. Nowadays, Vin de Paille is more a misnomer. The grapes are most often hung from rafters to dry or put in wooden boxes. Either way, the grapes have become raisins by the start of the New Year and already to start their slow fermentation. The wine must spend 3-4 years in cask during which it becomes a rich amber color full of honey and exotic candied fruits, more liquor than wine. Like Tokai, there is more than enough acidity to keep the wine from being overly cloying. Also, like Tokai and Vin Jaune, the wine has almost super-natural staying powers. The grapes for Vin de Paille include Savagnin, Chardonnay, Poulsard (vinified white).

The wines of the Jura truly shine at the table. The "sous voile" wines pair wonderfully with the region's most famous dish, Chicken with cream, Vin Jaune and Morels. Vin Jaune is the ideal pairing, but any "sous voile" wine is delicious. They also pair wonderfully with a simple roast chicken and a potato puree with walnut oil added, butternut squash soup, and stripped bass with a celeriac-apple puree. Trousseau is great with game and Poulsard with Pork, Poultry, and fish.