There's always some buzz around the Burgundy vintage prior to the "official" reports and scores. Certain themes come up again and again: Rousseau made great wines. Freddie Mugnier really hit it out of the ballpark. Aubert (de Villaine of DRC) thinks the Grands Echezeaux is phenomenal this year (and it is), but the RSV is really smokin'!

We certainly heard some of those things regarding 2006, but there was one note that came up again and again that left us very pleased, but not surprised. The word was that in 2006, Robert Chevillon, an elder statesmen of Nuits St. Georges, produced one of the collections of the vintage.

Just to be clear: We're not talking about the best collection in Nuits St. Georges, or the best collection in the Cote de Nuits, but one of the top collections in Burgundy. We have long been fans of the uber-concentrated, earthy yet silky offerings of Chevillon. Along with Gouges they are undoubtedly among the finest in Nuits St. Georges - but in all of Burgundy? A resounding nod of the head from the New York wine cognoscenti was what initially tipped us off that these wines were special. 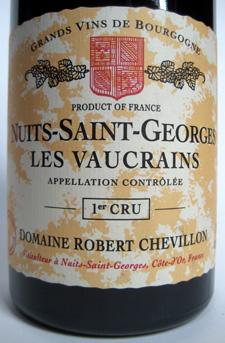 Beyond the individual tasting notes (and later the critics' scores, which backed up all these glowing early reviews), there are some sound reasons to believe the word on Chevillon is more than just some unexpected hyperbole. The village of Nuits St. Georges was one of the most successful areas in the Cote de Nuits in 2006 - the 1ers Cru did especially well, very good ripeness and few, if any, challenges. Chevillon's three most vaunted vineyard sites (Vaucrains, Les Cailles, Les St. Georges) were the source of his three best wines.

While all three will certainly make treasured old bones in the cellar, the Vaucrains seems to inch out the other two as his top offering.

Vaucrains is one of the great vineyards of Nuits St. Georges, producing a muscular wine that is chock full of dark fruits and earth. There is a textural element to great Nuits St. Georges that makes these wines feel just incredibly coating - palate staining we would say. The concentration in the Vaucrains is just massive, which is something you maybe don't hear that much as the hallmark of a 2006. What you also probably don't hear much is that the 2006 edition might very well edge out the 2005. The reason? If the 2005 is a black-hole of dense, stony, dark fruit, the 2006 presents this formidable, thrilling concentration with an etching of bright fruit, a lift that gives the wine perhaps a more striking agility and form. Chevillon's vines were all planted by 1920, and a portion of his vines are over 100 years of age. This stunning raw material, along with his balanced winemaking style, allow Chevillon's best 1er Crus to age well beyond 20 years.

Click button below to see our inventory of Chevillon 2006: