"At their best these are finessed expressive wines of the highest level in a style that recalls the Brunellos of Gianfranco Soldera or the Barolos of Giuseppe Rinaldi, to name just two producers with a similar aesthetic.."

It's been almost 4 years since we first began singing the praises of Paolo Bea's wines and in this short time the estate has gone from a culty, under-the-radar gem sniffed out by the curious, impassioned few to a traditional Italian phenomenon beginning to garner serious mainstream attention.

This will certainly be a controversial statement, but if I had to pick one and only one Italian bottling for my personal cellar, it would be Bea's Pagliaro. This may come as a shock to many of you who have never heard of the Bea family and their wines, but this truly is one of the most unique and compelling bottlings in Italy and deserves an honest try by all fans of Italian wines.

If Soldera and Rinaldi are Antonio Galloni's comparisons, I'll add iconoclasts such as Emidio Pepe, Eduardo Valentini, G. Mascarello, Miani and even the elusive reds of Fiorano, but the drop-dead gorgeous fruit of Bea's Sagrantino also resembles top Chateauneufs and even some more soulful Spanish reds. This wine is so multifaceted and unique that tasting is believing.

As thought-provoking and complex as the 2004 Sagrantino is (driving the obsession of wine geeks), there is also more than enough fruit for hedonists - a stunning perfume and a palate that is vibrant, expressive and buoyant with an incredible purity. Somehow Bea crafts an"old world" red that has incredibly energetic and palate-staining fruit, without being "new world" in style. Maybe this is Paolo Bea's signature: Intensity with agility?

If Sagrantino can be a monotone and muscular bruiser in less careful and considerate hands, Bea's beautiful 2004 is shimmering and transparent. This is the Burgundian side of Sagrantino, elegant with fine and polished tannins. While Bea's 04 Sagrantino shows its trademark raspberry and blackberry fruit, there is a clarity of terroir and stylistic rusticity that looks right down through the black, moist soil, into the rocks and minerals beneath. A shapely, spirited acidity gives the wine form, with a trail of superfine tannins providing something to wrestle with.

As with many of the 2004 Italians, this is a wine that has a fresh and open vigor to it right now (definitely decant it if opening anytime in the next few years!), though it will benefit with some time in the cellar for sure.

In 2004, only 800 cases are available for the world - and the US likely received 200-300 maximum, all of which will be completely sold out by the importer, Neal Rosenthal, in a matter of weeks.

Given the tiny quantities, the vineyard practices (biodynamic!) and the winery's fanatical following, year in and year out, this is largely a one-shot, here today, gone tomorrow deal.

After the current vintage sells out, the wines disappear into the never-to-be-seen-again ether of private cellars.

As a national wine store, we have access to nearly every great wine in the world, but I'm still kicking myself for drinking nearly every bottle in my case of the vaunted 2001s - as this email goes out, I have only a single bottle left. (If you see 750s of 2001 Sagrantino Pagliaro please let me know!)

Those of you that are interested in the top red wines of the world, please don't hesitate in joining me by grabbing a 6 or 12 pack from one of Italy's greatest. To order, please call us at (212) 980-9463 or click below: 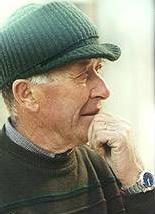 Members of the Bea clan have been living in the hills of Montefalco since 1500 and their production, their way of living is so simple, so "from the earth" that it really does feel like little has changed at their classic, self-sustaining Italian fattoria.

Though the family has gained a world-wide following for their wine, the Beas also farm olives, fruits and vegetables and raise livestock for their personal consumption. This is a farm with under a third of their 40 acres planted to vines.

Paolo Bea is the head of this family and at close to 80 years of age he continues to be the guiding force at the winery, translating years of experience and lessons from his father into some outrageous wines. His son Giuseppe has become more involved in the winemaking over the past few vintages though.

Paolo Bea Says:
The labels of Paolo Bea are smart, funny and unabashedly honest. Here's what the label on the 2004 Sagrantino says, loosely translated: "A capricious but good vintage, the grapes from the Southern facing Pagliaro vineyard are farmed without chemical treatment. The wine was macerated for 48 days on healthy skins, saw 14 months in stainless steel and 32 in wooden vat, and was bottled unfiltered, all without any forced stabilization and this guarantees that THE WINE IS ALIVE! Good with roasted meats, cheeses, and non-sweet deserts. Please serve at 62-66 degrees...

P.S.: With respect to similar occupations we've never sent out or given upon request samples of our wines to guides or journalists"