Today's Crush offer features the stunning wines of Vouvray's Phillipe Foreau. Foreau (along with Gaston Huet) *defines* Vouvray in the same overpowering way Penfolds Grange defines Australian reds, or Dom. Romanée-Conti defines Burgundy, or Chateau d'Yquem defines Sauternes. And while the wines just mentioned sell for hundreds of dollars a bottle, the legendary and mind-twisting wines of Phillipe Foreau sell for under $50!

Why so inexpensive? Chenin Blanc (the main white grape in Vouvray) simply isn't well known. Additionally, as Eric Asimov wrote in his New York Times blog the other week (lamenting Chenin's obscurity), Vouvray is one of the few places in the world suited to transform the grape into a wine of such complexity and finesse.

Make no mistake: The Vouvrays from Foreau's family estate, Dom. du Clos Naudin, not only define the appellation, they are on par with the most complex and rewarding wines in the world, having a richness that can make Chardonnay look like a pauper, and a finesse (especially as they age) that mirrors great Burgundy. Asimov puts it wonderfully: "No other grape I can think of combines actual lightness with such a sensation of density, almost as if the wine oozes through the mouth rather than flows." Oh, and another thing: Foreau's Vouvrays can age for a long, long, long time, especially the sweeter versions.

The good news is that *2005 is one of the greatest vintages of the last century* with '21, '45, '47, '89 and '90. There were no spring frosts to damage the flowers, and a long dry autumn with sunny days and cool nights followed. The bad news is that the 2005s won't be around for long; old Foreaus are notoriously hard to find. And unlike other Loire sweet wine appellations, Vouvray only makes sweet wines in the best years - and it made a prodigy in 2005. If your grandchildren aren't drinking Foreau's 2005 Moelleux with you, you�ll be telling them about it!

Sweet:
The sweeter versions show an even greater range of complexity, with sweet notes of hay, mint, lime and pear blossoms - and that's just scratching the surface! 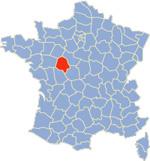 Vouvray lies in the heart of France's Loire Valley, near Touraine. This area (including Vouvray, Montlouis, Jasnières, Bourgueil, Chinon, and more) is sometimes called the "Middle Loire." Follow the Loire River west and you'll soon hit Muscadet and the Atlantic Ocean; follow it east and you'll come across the more inland appellations of Sancerre and Pouilly-Fumé.

Vouvray is known for (aside from its wines) its steep banks and hillsides of tuffeau rock (a type of limestone). Many homes, not to mention wine cellars, are literally cut into this rock, which was chiseled away centuries ago providing stone for the region's many chateaux. These spectacular estates belonged to the Valois kings who used the region from the 15th century onward for R&R.

Vouvray is made in a number of styles. The most common are dry (Sec), semi-dry (Demi-Sec), and medium sweet (Moelleux - pronounced "mull-YEW"). All the variations are worth exploring - Vouvray is notoriously good with food and the creative mind can match even the sweeter versions to a main course with mind-blowing results.

Can�t get enough? There are more classifications. Very dry Vouvrays can be called Sec-Sec (literally dry-dry), while less severely dry wines can be called Sec-Tendres (gently dry). Super sweet Vouvrays - sweeter than Moelleux - are called Doux, and they must have more than 45 grams of RS per liter. Yowzer.