A most esoteric, yet inspired, offer for you this Monday. It was just over a year ago that we sent out our first Frank Cornelissen offering.

These are some of the most extreme wines out there and though we had heard great things about Cornelissen, we sent out last year's offering with some hesitation and some serious disclaimers! (The hesitation, this year, has been allayed though the disclaimers remain - see below.)

Today, as we go back to the mountain (Mt. Etna that is) for another helping of these singular concoctions, the wines of Frank Cornelissen are gaining some very real momentum in the northeast. It's strange how things need time to settle in, to gain exposure, word of mouth...and then, you just reach that "tipping point" - the moment when all of a sudden, everywhere you look, there it is.

Just in this last month I've had two prominent NYC sommeliers ask me about Cornelissen's wines out of the blue. Last week a client wrote me about a bottle of Munjebel Blanc he had bought last fall from us, saying it was "incredible" and then out of nowhere, Eric Asimov of the New York Times bought a bottle at the store and wrote a very favorable blog post - click here to read.

So what's the deal with Frank Cornelissen and these extreme, Sicilian wines?

Cornelissen is a Belgian making wine in Sicily who really does take winemaking to the absolute edge. There are no concessions made to the normal mandates of viniculture or commercial acceptance and in a way, these wines are more like expressions of a philosophy - a philosophy that centers around flux and dynamism, a philosophy that eschews manipulation of any sort and simply allows the influences of nature, the whims of nature, to create whatever it creates. (Click here for more on the specifics of the winemaking.)

Cornelissen's wines have, not surprisingly, gained a reputation that scares many due to their extreme volatility, but delights others with their profound depth, beauty...and yes, complexity. Even British wine writer Jamie Goode, who has a background in science and seldom appears to be infatuated with such esoteric wines, states, "They are actually fantastic: unusual, but compelling." 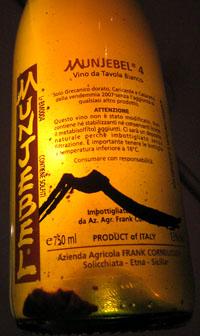 Let's say this now, and clearly: These wines are not for everyone! However, for those of you who embrace the spirit of creativity (and chaos) and can fathom a wine that is an experience and not just something to pair with the evening's fare, the wines of Frank Cornelissen are probably worth a try - at least a bottle or two.

While Cornelissen shares a similar spirit with the adventurous viniculture of Gravner, Radikon and the Vodopivec brothers (to name but a few), we're not sure even these wines will prepare you for the adventure of a Cornelissen. In the end, as with all things, words only go so far; these wines have to speak for themselves.

Please see below for complete description of both Cornelissens on offer today, but here are our disclaimers, which remain the same from last year: Bottle variation is a part of the Cornelissen philosophy, a part of the deal. Also, the wines may require some serious patience after opening: there may be a certain degree of "sparkle" after opening which will require you to let the bottle sit for a few hours before drinking for an optimum experience: see here for more.

All sales are absolutely final and we encourage all buyers to review what level of risk (and reward!) they are willing to take. You have been warned!

Because of the extreme rarity of these bottles (we are one of 3-5 stores worldwide with access to them), as well as the complexities of acquiring the wines, and arranging for their safe, temperature-controlled delivery, we ask you to place your orders by end-of-day, Tuesday, May 19. All orders will then be subject to confirmation, which we expect to have by end of day Wednesday, May 20. Obviously, your credit card will not be charged until we have confirmed your purchase.

We expect the wines to be available this fall, though because of the delicacy of the wines we will once again sacrifice a "speedy delivery" in favor of a safe and considered shipping policy. Obviously, all wines will be shipped via refrigerated containers and we will arrange to NOT receive the wines from Europe during the warmer months. Many thanks, in advance, for your understanding.