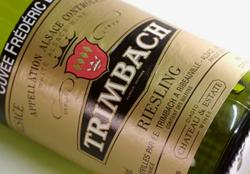 Sit down with a bunch of wine fanatics and if the topic of Alsace comes up, there's always a lively discussion.

Undoubtedly, someone will bring up the great stereotypes: wines from Germany have discipline and cut; while the French are flamboyant but soft and with no real backbone. (Note: I'm just talking about wines!)

This could perhaps be an unending debate, were it not for the opulent yet restrained wines of Trimbach.

If there is one producer who marries the richness of French Riesling with the verve and rigor of its German counterpart, it is Jean Trimbach.

Today's offer, the Trimbach 2001 Riesling Cuvee Frederic Emile, is one of the best Alsatian Rieslings and an outlandish value.

Consider that the wine's big brother and Alsace's undisputed king of Riesling, the great 2001 Clos St. Hune, will set you back well over $100 and require a few decades in the cellar to come into its own.

Then consider that the wine is made in an identical style as Clos St. Hune, from terroir that is nearly as good (both come from top Grand Cru vines).

The result is a "best kept secret" among wine geeks that delivers a whopping amount of the subtle exoticism and heft of Clos St. Hune at a fraction of the price.

What makes both of wines so stunning is the beautiful interplay of opposites: A firmness and a purity that counters the opulence of the wine's mouthfeel; a freshness that balances the deep earthen tones. This phenomenon seems somehow both absolutely natural and completely unfathomable (always a good sign in my opinion).

Made from grapes from 30+ year old vines, the 2001 Freddy Emile has mysterious notes of dried citrus skin, candied lemon, orange peel, bees wax, lanolin, crushed stone, gravel, a whole quarry's worth of minerality, talcum powder and super-fine moist chalk. While the heft is tangible, the wine shows absolutely no sluggishness - it is delineated and focused ... a 'precise locomotive' of a wine, if such a thing exists.

It should also be pointed out that while Cuvee Freddy isn't a 25+ year wine like Clos St. Hune is, it certainly demands cellaring 5-10 years before it reaches its apogee. To capture some 'baby fat' and drink now make sure that you give yourself ample time for a healthy decant!

Though we bought a substantial quantity, it's my sincere hope that we have enough wine that those of you who have never had a great Freddy Emile will be able to grab a bottle or two. (I have purchased a case for my own cellar, which I will relinquish a few bottles from, if need be).

Given the response expected at today's incredible price, we're going to implement a 12-bottle maximum per customer on the "regular" bottling and a 6-bottle maximum on the Vendage Tardive. Using these guidelines please let us know how many you would like, and we'll do our best to fill your request.

All wines are NET priced / No Further Discount
and are in-stock, ready for immediate shipment/pickup/delivery.

Where in the World?
Alsace
Located about 300 miles due east of Paris, Alsace is bordered on the west by the Vosges mountains and on the east by Germany.

Though the region hasn't moved at all in the last 200 years, the French-German border has. France gave up Alsace to the newly-unified Germany after the Franco-Prussian war at the end of the 19th Century; Germany returned the region back to France after World War II. Today, the region shares many things in common with its close neighbor Germany - Riesling being just the most obvious!

The towns have that distinct German Alpine architecture and the sausage-and-schnitzel laden cuisine would make any German feel right at home.

Trimbach & Frederic Emile
The Trimbachs are coming upon their 400th anniversary as winemakers. It remains a family-run estate, with Bernard and Hubert Trimbach largely running the day-to-day business while Bernard's sons Pierre and Jean carry out the winemaking.

The family's great holdings are dispersed around three villages and include the Grand Cru vineyards Rosacker (a small 1.25 hectare parcel which produces the legendary wine Clos St. Hune), as well as a half hectare in Geisberg and 6 in Osterberg that are used for Frederic Emile.

Frederic Emile was the family's fifth-generation winemaker in the late 1800s (the winery was founded by Jean Trimbach in 1673). He extensively promoted his wines throughout Europe and decided that the family was to begin estate-bottling its wines instead of selling them to others in bulk. The cuvee Frederic Emile seems to be in homage to the legitimization and widespread recognition of quality that this decision prompted.