I was at Pierre Chermette just prior. I typed “Charnay, Crière” into the GPS, and fifteen minutes later, Voil&agrave! I was in Crière. There are maybe a dozen and a half homes in the hamlet. I then spent twenty-five minutes trying to find Brun.

After a couple of phone calls, Brun finally pitied me and agreed to meet me in front of Eric Texier’s up the road. Once at Brun’s, I realize that I had missed the sign, which is handwritten and - at best - 2' x 1.5’.

Once there, though, the quality of Brun’s 2009 line-up was simply incredible. Brun says that the 09 Beaujolais vintage is the best quality he’s ever seen. The wines showed a level of concentration and breed that I’ve yet to encounter in Brun’s wines. And trust me, with Brun the bar is set pretty high.

At tastings in the U.S., Brun always seems a bit shy and soft spoken. He was exactly the same way during my visit. He came off as exceptionally modest. His wines, though, not so much. What Brun has accomplished with the vines he inherited in southern Beaujolais - an area that can only be labeled with the lowest designation, plain Beaujolais - is something to take notice of. It’s something that only a thoughtful, probing and ambitious winemaker could achieve.

With the exception of a small pocket of granite, the soils in southern Beaujolais are limestone. The area is called Pierres Dorées or “golden stones.” (Brun has named his estate after this, calling it Terres Dorées, or golden earth.) The iron-rich limestone and clay soils have a yellowish golden color - you should see some of the homes built out of these stones, as they exhibit a beautiful golden glow. I’ve read that southern Beaujolais wasn’t even planted until the 19th century, when demand for Beaujolais exceeded what the granite soils to the north could provide. Limestone is generally thought to be inferior to granite for growing Gamay, as the grape tends to be prolific, and granite tends to check yields better than limestone.

When I asked Brun if he had any favorite wines out of his line-up, he said Ancien and Moulin-à-Vent. The Ancien “was the wine that I’ve worked hardest on and the wine that made me famous.” If any wine shows what can be achieved with Beaujolais on the limestone soils of southern Beaujolais, it’s Ancien. It’s also a great introduction to Brun’s style.

Brun’s wines tend to show a level of vigorous structure that’s unusual in Beaujolais. The signature here is one of utmost purity and detail. If people criticize Beaujolais done in carbonic maceration as not being “wine-y” enough, Brun’s wines, made in a more Burgundian style, are decisively wine-y in their high-pitched intensity and finely-etched architecture.

Throughout my visit, Brun repeated that the winemaker’s obligation is to understand the terroir and express it in his wines. His careful observation of Gamay grown on limestone led him to pursue a Burgundian style of vinification instead of the usual carbonic maceration used in Beaujolais. Brun destems and crushes the grapes before a cool maceration lasting for up to a week. 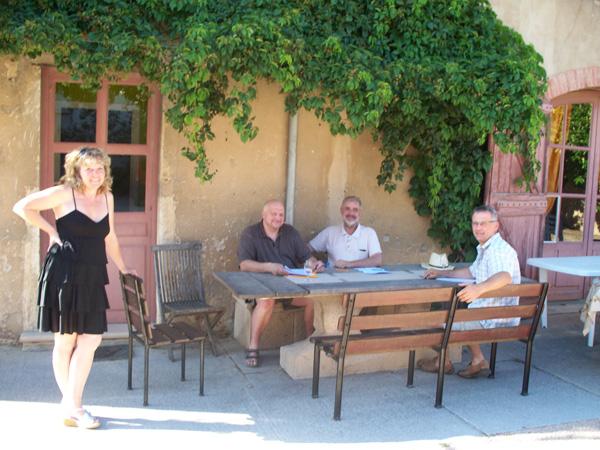 Pictured above are Marie & Marcel Lapierre, Jean-Paul Brun (middle left) and a friend of Brun’s.

Brun provides multiple explanations regarding his decision to vinify with more Burgundian methods. To begin with, he told me that he realized that using stems in the wines he was making in southern Beaujolais produced wines with too much tannin. Unlike the granite vineyards in northern Beaujolais, Brun felt that the tannins in the stems of his grapes grown on limestone were too harsh. Brun saw parallels between his limestone soils and the limestone soils of Burgundy and decided to give it a try. He believes that the wines now come out finer and more concentrated. He vinifies his Crus in the same way. He also believes that in the past, “when carbonic maceration wasn’t as precise,” Beaujolais may have been made in a style somewhat similar to his.

Most importantly, he believes that Burgundian vinification allows him to push Gamay to another level of quality. During my tasting with Brun, I asked if he believed that Beaujolais could be a great wine, or just the delicious, food-friendly, gulpable wine that it's often characterized as when people want to sing it’s praises. (I had in mind Andrew Jefford’s statement in The New France that Beaujolais has “a huge capacity for goodness, and almost none for greatness.”) Brun, with his characteristic understatement, said “I believe it can. That’s one of the reasons I’ve pursued Burgundy-style vinification.”

In recent years, Brun has begun to buy grapes and acquire land in the Crus of Beaujolais. He finds the Gamay that he grows on limestone to be more elegant and more similar to Pinot Noir; Gamay grown on granite tends to be rounder, less akin to Pinot.

It seems that one of the realities of being a vigneron in southern Beaujolais is that you have to produce a pretty high volume of wine. When you talk to winemakers in the Crus and hear production levels compared to Brun and Vissoux in the south, Brun and Vissoux produce nearly ten times as much wine. During my visits in Beaujolais, more than one winemaker said he or she envied Brun for his boundless energy, ambition and ability to maintain such a level quality while producing so many bottles. I definitely heard, “he never sleeps” more than once.

With high quantities, many different wines and limited cellar space, the unpredictable nature of fermenting with natural yeast is difficult. To help things along, Brun harvests a precocious vineyard and ferments the grapes in a rosé style to make a levain (a starter yeast) to jumpstart fermentation. This also helps the beneficial yeasts win out over bad yeasts that can sometimes be present in the grapes. In a perfect world, Brun says, he wouldn’t use the levain, as he thinks a less controlled and less rushed fermentation would be a little better.

Enough about the estate. Brun’s 09 line up is simply stunning. Let’s get to the wines…

2009 Beaujolais Blanc
Classic Brun BB with the volume turned up a bit. Round and richly textured with citrus, peach and chalk dust. Lovely, as usual.

2008 Roussanne
Brun was intrigued by the fact that Chignin (where Roussanne grows in the Savoie) and Beaujolais are on the same parallel, so he decided to take a stab at making some. He produced a tiny amount in 07, but 08 is essentially its first commercial release. Raised in steel and cement. Juicy and fresh with plenty of florality. Fun to drink.

2009 Roussanne
In bottle for one month. Same vibe as above but showing a bit more crisply as well as more aromatically inhibited due to youth.

2008 Condrieu
You read right. Brun Condrieu. If memory serves me, he buys this and his Côte-Rôtie from a family member. Very typical Viognier scents of peach, flowers, etc., with an oily texture. Nice balance for Viognier.

2009 Côte de Brouilly
As usual, this wine is coiled up with energy. Plenty of dark berry fruit with tinges of medicinal roots adding complexity.

2009 Ancien
A seriously structured, extract-rich version of Ancien. Dark cherry fruits are married to an intense mineral streak with a talc-like texture. It was showing pretty shutdown. It’s good wine, for sure, but difficult to exactly get a read on with its being dominated by its structural elements. Showing a touch of alcohol, which I think is sticking out just because of how closed the wine is showing.

2009 Morgon
From a plateau close to Côte du Py. Brun describes this as a very dry terroir. A very good wine. Fascinating profile of cherry fruit with a spicy, almost scorched earth type of minerality. This has the potential to be a mind-bending wine in seven years.

2009 Fleurie
I’m told this is sourced from Grille Midi, one of Fleurie’s top climats. Fleurie is usually described as feminine and lacy. At this point, Brun's is definitely not that. This has Brun’s signature firmness and lean structure. There is Fleurie’s signature perfume and flourishes of bright red fruits. The finish is awash with salt, herbs and dark minerality.

2009 Moulin-à-Vent
Very, very good. One for the ages. Shows a level of breed and finesse greater than everything before. Very complex with vivid plum, blueberry and gently spiced cherry fruits backed by savory, almost meaty elements and notes of crushed stones.