In September of 2007 I was lucky enough to travel through Germany with legendary importer Rudi Wiest. I have long been a fan of the great wines of Germany but I have to say this trip was nothing short of a revelation. I had the opportunity not only to speak with the winemakers and walk their vineyards with them, I got to taste roughly 400 wines, most of them from the 2006 vintage. I'm happy to offer some of the highlights of this trip in the form of my "German Travelogues."

Ludwig Breiling has been the winemaker at Karthauserhof for many years and his signature is an exquisitely enchanting dance of minerality and acidity. These two sensations are for a Karthauserhof more than mere descriptors, they are the very core of the composition. The fruit, though lean and graceful, is never the most important part of a Karthauserhof. Rather, the wines quietly reveal a singular delicacy, a wispiness that is persistent and almost always refreshing, like a brisk morning fog where you can almost smell and taste the cold stones in the stream and the lemon orchards over the hill - which is, not surprisingly, very much the atmosphere at the estate.

The lichen-dappled stone wall at Karthauserhof.

This fresh morning quality becomes only more rich, more mystifying with each passing year. Indeed, these are some of the most satisfying Rieslings to age, as their glacially clean minerality deepens and becomes ever more complex and enticing. We have a good library of older wines; they are fantastically gratifying mature Rieslings - click here to see our real-time inventory.

Karthauserhof is located in the Ruwer Valley, which is but minutes away from the ancient city of Trier (the oldest city in Germany as the people will tell you), though it feels very remote. Horses and sheep are more at home here than anywhere on the Mosel, the dense forests make it feel like Germany's "Urwald." I couldn't help but feel like this is the landscape Albrecht Durer had in mind when he made his woodblock print of Adam and Eve. 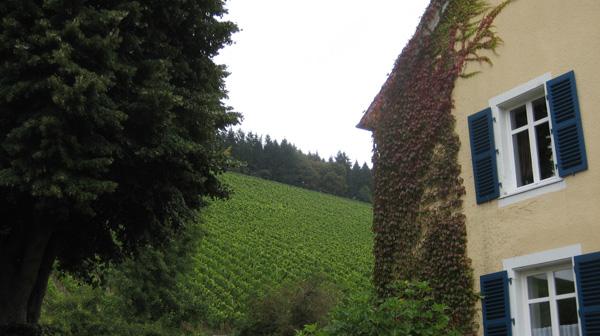 The dark forest to the left; the vineyard front-and-center; the estate lurking at the right.

With dense, wild forests all around, it should probably not be surprising that Christoph Tyrell, the man who has overseen almost two decades of this medieval estate's long history, is an avid hunter - though it's my guess he needs to find lots of hobbies to consume his semi-maniacal energy. Though the tasting room at the estate was damp and a bit cold (so it is with old estates), the tasting itself was superb. Christoph led the event and I have to say he is very entertaining; he has a "bad boy" quality that makes it fun to be around him. Rudi tells me he drives his Porsche much too quickly. He smokes, probably too much. If there's a bad habit he's probably had it, or has it currently, or will have it next week. That said, he's also tremendously full of life, wickedly knowledgeable about the estate and its wines, its terroir, and he deserves a lot of credit for bringing this estate back to its former glory after some tough years in the mid-1980s when they were caught chapitalizing some of their Pradikat wines. Karthauserhof is most definitely back on stride. 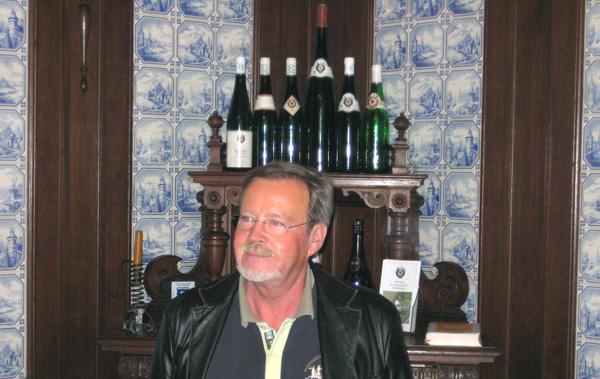 The man, Christoph Tyrell, in the ornamental (yet chilly) tasting room.

The name Karthauserhof derives from the Carthusian monks who were given the vineyards in 1335. In fact, in the courtyard of Karthauserhof stands one of the oldest structures on the property, a 14th-century building in which the brothers lived and slept (see photo below). When the estate was secularized at the beginning of the 19th century, the Rautenstrauch family purchased the estate and Christoph represents the sixth generation of family ownership.

Driving to Karthauserhof, you'll eventually find yourself winding up a rather long road and will notice a steep vineyard off to your left. This is Karthauserhof's grand vineyard, a 19-hectare monopol, or in German "alleinbesitz," simply called "Karthauserhofberg," meaning the mountain or hill of Karthauserhof. 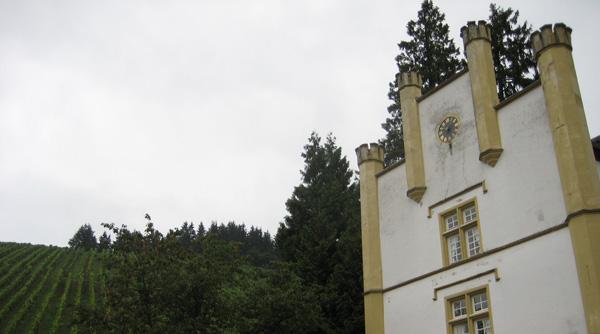 The 14th-century "dorms" for the monks; currently it's rented out to a family. How cool is that? I love Germany. The vineyard - Karthauserhofberg - rises with determination at the left.

The 2006 lineup here is very, very good, and the delicacy of the style (and higher natural acidities of the Saar and Ruwer wines in general) gives even the higher Pradikat levels a nimbleness, which is not often the case among the 2006 Germans. For the record, Karthauserhof makes astounding dry wines as well. Not only are they exceptional, they are also a relative rarity in the Mosel-Saar-Ruwer.

For lovers of leaner, mineral-driven Rieslings, this is definitely an estate to get excited about.