Layer Cake may be the most popular (and undervalued) Australian Shiraz ever.

We featured the 2005 vintage in an email about a year ago and the response was overwhelming. What was truly amazing was the incredible number of customers who must be called: Layer Cake Fanatics! While we are used to repeat orders, customers came back 3, 4 and 5 times to restock this Australian anomaly! 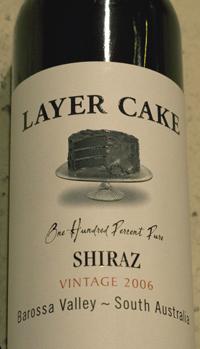 Through the course of the year, Layer Cake has only gained momentum. Though the last vintage sold out sometime in the early Spring, the calls continued to roll in and customer reservations totaled in the hundreds of bottles - really just on the hope that a 2006 vintage would be produced! For a while it was not clear whether "The Cake," as the staff affectionately calls it, would be a one-off for New World Genius Jayson Woodbridge, or an ongoing project.

About a month ago we received word that the 2006 was a reality - the "Layer Cake Nation" rejoices!

The mania, though extreme (one example: someone driving 250 miles to grab his case!), isn't that surprising given the outrageous quality of Layer Cake. This is Aussie Shiraz in the style of top-of-the-line Molly Dooker or Marquis | Philips wines at half of their price. You can thank Jayson Woodbridge, the renowned proprietor of "Cult Cab" Hundred Acre, who has kept production low, and the bottle out of the hands of the critics ... for now.

The wine's bountiful dark berry fruit, rich mocha undertones lead to an expansive midpalate with a gorgeous mouthfeel that is downright velvety... making it perhaps the richest, most concentrated an intense Shiraz under $50 we've ever tasted - and it is well under $50.

Though the intensity of this wine makes it feel like it's a "special occasion only" wine, its price makes it a great fit for casual weekday dining. After months of delays, the 2006 Layer Cake has cleared customs and it is in the country! We learned our lesson last year, and fought for as large an allocation as we could get.

That said, only 1,500 or so cases were made and the quantity that was brought into the U.S. has already been gobbled up. This wine will disappear just as fast as it has re-appeared! Don't miss out - stock up so that when it's gone, you'll have reinforcements in the cellar! 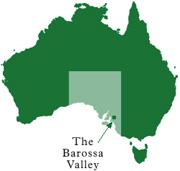 Located 1 hour north of Adelaide in the state/territory of South Australia, the Barossa Valley is the most famous wine region in the country even though it accounts for a relatively small percentage of overall Australian wine production.

Barossa is home to the famous Penfold's Grange, which broke the Australian wine scene with its first vintage in 1951 and historically has been known as the benchmark age-worthy Australian Shiraz.

Despite the fact that Phylloxera ravaged other parts of the country in the late 1870s, Barossa vines were never infected - some say due to the heat and dryness of the region, while others claim it was strictly-enforced quarantine legislation.

Physically, Barossa is located between the ocean and the desert environs of the Outback and is bordered by the namesake large Barossa Range to the east. Each environment struggles to dominate the valley's climate and makes the days incredibly hot while keeping the nights very cool.

The valley itself is 40 kilometers (24 miles) in length and is filled with gently rolling hills. Because Australia is in the southern hemisphere its seasons are reversed and the harvest begins in March and continues into April.

Settled in 1842 by immigrants of Prussia and Silesia, the name Barossa comes from the Australian Colonel William Light who took the name from the Spanish Barrosa Beach, the location of an Anglo-Spanish v. French battle in the early 1800s Peninsular War.