Germany is full of world-famous terroirs. Palmberg-Terrassen may not be world-famous, but it is one of the most soulful vineyards in Germany and in 2007 produced an incredible value of a Riesling. Consider the following details:

- The vines are trained to a single cane (the traditional manner) increasing the concentration and limiting the yields severely.

- Blue and gray slate dominate, giving the wine an intense and complex minerality.

- The steep terraces of this site have largely run wild as it's expensive, and difficult to farm. Everything here must be done by hand - check out the incline of this site! 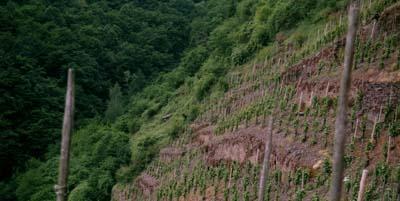 This is the Palmberg Terrassen and it is a vineyard that is more than farmed by the Stein family; it is loved by the family. There's a devotion here, a connection to the land that is humbling. This is an article I really struggled with, because both the site and the wine deserve great, honest words. Just listen to Ulli Stein (a genuine force of intelligence and good cheer and easily one of the more captivating people you're likely to meet, see below for more) talk about this site and its meaning to his family and it's hard not to be moved. His 86-year-old father has been making wine here since the early 1960s and he still visits the site almost daily, tending to his vines and drinking the wines of the vineyard as often as he can. Many years ago he built a small shrine in this vineyard, which I photographed (see photos here) though it doesn't even begin to do the place justice.

The family only farms 1.3 hectares in this vineyard filling up, in 2007, only 2 Fuders worth of juice (about 230 cases). The 2007 is THE FIRST bottling to ever travel much beyond the Mosel, let alone cross the Atlantic.

I tasted this in Germany earlier this year and was captivated by the site and absolutely floored by the wine. The two have much in common - it would be difficult to imagine a wine that better evokes the wild beauty of the vineyard from where it originated than the 2007 Palmberg Terrassen. The wine is racy and seriously concentrated (though only 11.5% alcohol, fairly light for an off-dry Riesling) with ripe melons and a vivid, wild citrus that seems heavily dusted with dried green herbs, sage, darker cooking spices and a whole spectrum of dusty earthen notes - as if you could suck up all of the dazzling notes of a summer's field in the waning weeks of August and put 'em in a bottle. The palate is raucous, joyous, filled with citrus, sea salt, a complex spectrum of minerals and a savage quality to it that I've sincerely never encountered in Riesling before. This adds tremendous depth and dimension.

Ulli Stein deserves much more attention and acclaim but he pursues his own aesthetic with little concern for the whims of the marketplace. He doesn't submit samples to the Gault Millau, Germany's premier wine publication, and he focuses on a style of Riesling that is never flashy - delicacy, freshness and transparency are honored above all.

In a vintage with no shortage of great Rieslings, the 2007 Palmberg Terrassen speaks out with a wild authenticity. This is a great, dashing little Riesling and we believe squirreling away a few to drink over the next 5-7+ years will prove to be very, very rewarding.

Click button below to see our real-time online inventory of 2007 Stein Palmberg-Terrassen:

Ulli Stein & the
Mosel Wine Merchant:
Rebels with a Riesling

Ulli Stein, the laughing, happy and gregarious winemaker at Weingut Stein is also a chemist and one of the most knowledgeable people you're likely to meet regarding the Mosel, its history and vineyards. The Wine Advocate's David Schildknecht wrote the following:

"Dr. Ulrich Stein is infamous for such lost causes as serious Pinot and Cabernet on the lower Mosel, the reclamation of abandoned, frighteningly steep sites and battling the entrenched 1971 German Wine Law. It seems, though, that he is more a David than a Don Quixote, because he has won them all: his reds routinely stump the stars in blind tastings; he has almost single-handedly rescued some of the Terrassenmosel's potentially greatest acreage; and last year he argued and won his case before the EU court against Germany's prohibition of vin de paille (Strohwein)."

Seriously, Ulli Stein may be one of the most unique personalities you'll come across in German winemaking. Trained in chemistry, Ulli Stein is just as likely to try to explain to you some complex detail of the winemaking process as he is to discuss nuances of one his vineyards in a forgotten corner of the Mosel. Stein's vineyards, like Senheimer Vogteiberg, Alfer Hölle, and Neefer Frauneberg, cause even the most enlightened German wine fanatics to scratch their heads.

The wines of Ulli Stein are imported by another quiet scholar, Lars Carlberg of Mosel Wine Merchants. We are proud to say that we were the first U.S. store to support the MWM portfolio and they remain one of most courageous importing companies that we've encountered. Not only do they specialize mainly in Rieslings from the forgotten Lower Mosel, they also focus primarily on dry Riesling - a style of Riesling that's wildly popular in Germany, but relatively unknown in the US.

The wines of Ulli Stein are perfect representatives of MWM's practice of going against the grain. The Stein brothers, besides being impassioned scholars of the Mosel's forgotten vineyards, are strong-minded and they don't particularly care what the "critics" think of their wines - high scores and higher prices aren't really what they're interested in. They don't submit samples to the famed German wine review Gault Millau and they've had "falling outs" with some critics. No matter - the wines are so obviously pure, and just as obviously, worth much more than they sell for.