Tim Frohlich, the 30-something ultra-cool winemaker, may well be a genius. He has what Rudi Wiest calls "the touch." Unlike most winemakers in Germany, he did not study at Geisenheim; instead, at the tender age of 21, after only an an internship, he simply told his parents (his mother was making the wines at the time) that he was ready to take over the estate. And so he did.

I can't quite explain it, but when Tim says something to you, it's said in such a frank and even tone that it's hard to resist. It's as if he can only recite god-given facts. In my imagination, Tim wakes up one morning, realizes he is now going to make the wines at the estate, and calmly tells his mother and father. They, in turn, nod silently in agreement and then everyone goes back to work without another word.

However it went down, it was a wise move. Tim's first vintage was 1995 and in the decade plus since, Schafer-Frohlich has risen to an elite status in the Nahe. Donnhoff beware. Emrich-Schonleber watch out! Indeed, after the mind-blowing strengths of his lineup of wines from 2005, 2006 and now 2007, I really don't think there are many people who could argue that this estate is not on paar with Donnhoff and Emrich-Schonleber.

The style at S-F is decidedly angular and aggressive. Though never rough, the wines have so much thrust it's almost shocking. Tim's Rieslings are chiseled, with concentrated fruits smashed on top of shattered shards of slate. Rereading my notes from this tasting is entertaining; among other things, I refer to the wines as "Riesling assassins." I've referred to Donnhoff's 2006s as "fighter-jet Rieslings" - and while I think the phrase is apt for Donnhoff, the truth is I first thought of this analogy while tasting Tim's 2006s at the estate. The wines are so transparent, so dense with wet stones and rocks through the mid-palate that one has the sense when drinking them young that if you swallowed the wrong way, this exposed minerality might slice the inside of your throat.

The dry wines in general show more of these sheer and cut angles, though you'll find this theme in the sweet wines as well. Tim also uses native yeasts, so the wines, in their youth, do show a bit of animal funk - "spontan" as the Germans say. This blows off when the bottles are open and allowed to breath; it also integrates in the bottle with age. 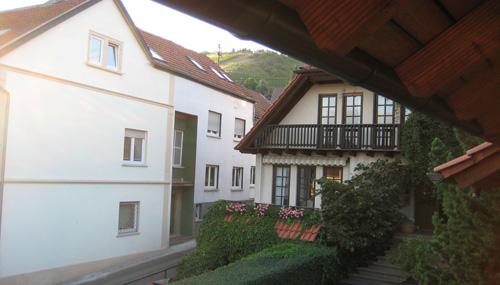 A photo taken from the porch at Schafer-Frohlich - note the Felseneck vineyard peaking out between the houses.

A few notes on vintages at Schafer-Frohlich

The 2007 lineup here is just stunning. This vintage had loads of concentration and a cutting, nearly tangible structure of rocks and minerals. For purists, this is one of the best vintages in a long time and by most accounts, and certainly our tasting notes, slightly more invigorating than 2005. Not quite as flashy, and 2007 does not have the opulent length of fruit that 2005 may show, but the core of the 2007ers is so stony, so dense and compact. This is a vintage where nearly everything is good, though the sweet spot probably was the Spatlese. In 2007, Tim's Bockenauer Felseneck Spatlese and - wow wow wow - his Spatlese Gold Capsule from the same vineyard site, are just not to be missed.

2006, as you've probably heard, was not the easiest vintage. While I think some of the wines will probably prove to be greater than the 2005s, it wasn't the same "walk in the park" sort of year. Botrytis, and its evil brother rot, was a big problem in certain parts of Germany. Tim, however, looked at me quizzically when I asked him if they had had any problem with rot. He said simply, "no." While most estates I visited went through pains to explain how hard it was, how they did this or that to save the vintage and had to reduce their productions incredibly, Tim made no fuss about it. Frankly, I felt sort of stupid for asking. Indeed, there were substantial rains in the fall but Tim told me he simply made the decision to wait it out and harvest later. An extremely gutsy move, but it paid off. The grapes got another two weeks of hang-time and the weather was good for the harvest. They did hire extra help for the harvest (30 people as opposed to the usual 20) and they were extremely selective, but they didn't lose much wine. Uniquely among German estates in 2006, S-F produced about as much wine in 2006 as they did in 2005. Tim attributes much of the success in 2006 to vineyard management. His father Hans is the vineyard manager and at the tasting he sat quietly in the corner, whispering with Rudi. He appears to have his son's coolness - he's reserved and withdrawn though friendly. 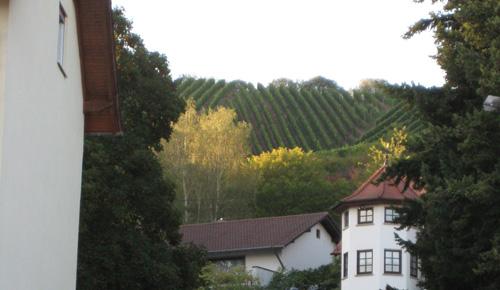 The Felseneck vineyard rises up above the beautiful, sleepy town of Bockenau.

For 2006, the raw material in Bockenauer Felseneck and Monziger Halenberg was near perfect; the vineyards of Schlossbockelheim (Felsenberg and Kupfergrube) saw a bit more fog and so botrytis was more prevalent there. No matter, botrytis, as we all know, can be a good thing. In this case it was. Still, special mention should be made of the wines Tim crafts from the Felseneck vineyard. He considers this his best site and from it he bottles a number of wines that are all cut and lean, yet somehow packed with complex, layered fruit.

Click button below to see our real-time online inventory.