In September of this year I was lucky enough to travel through Germany with legendary importer Rudi Wiest. I have long been a fan of the great wines of Germany but I have to say this trip was nothing short of a revelation. I had the opportunity not only to speak with the winemakers and walk their vineyards with them, I got to taste roughly 400 wines, most of them from the 2006 vintage. I'm happy to offer some of the highlights of this trip in the form of my "German Travelogues."

I had tried some Schloss Lieser wines before, but I was not expecting the perfection that I experienced. Let me not be shy here: I consider the collection amongst the absolute best I had while in Germany. 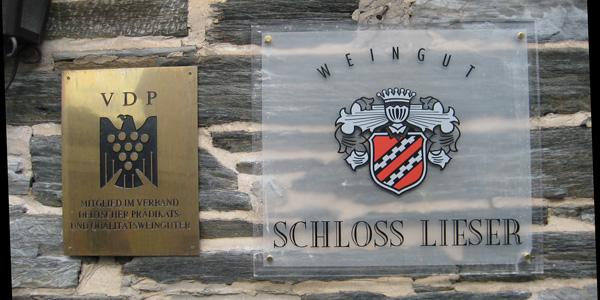 The slate walls of the estate, showing off the VDP plaque.

If Schloss Lieser has avoided the lime light so far, it is for one reason only: It's very, very small. I don't think people realize how small this estate is. In a good year, Schloss Lieser might make about 6,000 cases; in 2006 the estate produced less than 3,500. Yes, rot was something of an issue in the Middle Mosel in 2006. The harvest had to take place quickly as it was only a matter of days between superbly healthy grapes and rotting messes of fleshy fruit. Selections had to be severe. Those winemakers who had the courage (and the financial ability) to pick only the choicest fruit were rewarded with just superb wines of immense concentration. Yes, 2006 was trickier than 2005 - the lows are lower, but in some cases the highs might be higher.

"Schloss" in German means "castle," and indeed the Schloss Lieser estate is grand, though I don't know that I'd exactly call it a castle. I didn't spy any turrets, there was no moat. Lieser, as are most of the Mosel's villages, is rather tiny and very quaint. You could walk from one edge of Lieser to the other in 5 minutes (and not break a sweat). The actual "Schloss" is massive and made out of piles and piles of blue and gray slate. No need to go into the vineyards to study geology here - it's literally stacked up around you when you're at Schloss Lieser.

Though Lieser's vineyards were very well regarded at the beginning of the 20th century, enthusiasm waned in the 1980s and early 90s as the estate passed through several hands and quality dipped. In any event, the village is perhaps geographically doomed to obscurity. To the north is Bernkastel and the near 180-degree bend of the Mosel, which sets up the perfection that is Bernkasteler's Doctor vineyard. To the south is the Haag family home, Brauneberg, and its formidable wall of vines, the Juffer and Juffer Sonnenuhr.

The wall of vines that is the Brauneberger Juffer vineyard.

The winemaker at Schloss Lieser, and since about 1994 the owner as well, is none other than Wilhelm Haag's eldest son Thomas. (Wilhelm Haag is the elder statesman of the Fritz Haag estate, one of Germany's most elite estates.) At one point during the trip, Rudi said to me, "Wherever there's a Haag making wine in Germany, you better bet I'll pay attention." Rudi is a wise man, and since the mid-1990s the estate has been rising through the ranks. I believe the estate has achieved nothing short of greatness in 2006.

What I found just thrilling about Schloss Lieser's best 2006s is their absolute sleekness. In a vintage that has produced some clunkers, these Schloss Liesers are superbly concentrated and complex, but all this fruit and minerality is packed into an aerodynamic frame, as if the wines were made in a wind-tunnel and not a cellar.

The entire collection is exceedingly elegant, Middle Mosel filigree at its finest. They are taut - there is no waste, and certainly no want. The quality shouldn't be too surprising because Schloss Lieser farms a chunk of the Mosel that is world famous: the Brauneberger Juffer and the Brauneberger Juffer Sonnenuhr. Schloss Lieser is also basically responsible for putting another Middle Mosel vineyard - the Niederberg Helden - back on the map. The wines from Niederberg Helden tend to be slightly denser and heavier than their Brauneberger brothers, though they lack nothing in grace.

It was a thrill to taste with the wickedly intelligent Thomas Haag. Thomas is rather quiet and watched over the tasting as if he was evaluating us. He obviously has a relentless mind that works over every detail again and again. There is a rigor within Thomas Haag that is evident; I think at some level his wines show this attention to detail as well. 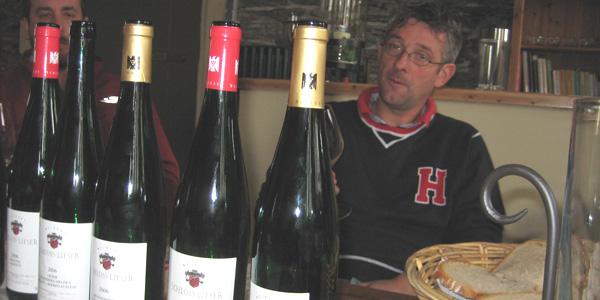 Thomas Haag in his tasting room. I have no idea if the "H" on his shirt stands for Haag.

Thomas's first vintage at Schloss Lieser was in 1992; in 1991, he made the wines at Bert Simon in the Saar. Born and raised in one of Germany's elite winemaking families, I can only assume that Thomas has been studying winemaking his entire life. He must know Brauneberger Juffer the way I know the corner cafe or the subway ride under the East River.

Rather uniquely I think, Thomas only uses stainless steel - I believe even for the top dessert wines. When I asked him about this, he became very animated. Thomas's explanation began with the fact that times have changed. Global warming or no global warming, the weather has been undeniably hot in Germany for the last 5 or more years. There is no getting around the fact that Oechsle (the measure of the amount of sugar in the grape juice before fermentation) are higher than they have been in the past. And I'm not talking the distant past - I'm talking 20 years ago, when Thomas's father Wilhelm was making wine.

Thomas believes that stainless steel preserves the acidity a bit better, balancing these higher Oechsle and keeping the wines alive with tension and electricity.

The 2006 Brauneberger Juffer Kabinett is one of the top Kabinett's of the vintage. It very well might be the best I've had, though I'd like to revisit a number of wines before I start trying to lay down the law. It is extraordinary, showing the beautiful minerality and class of this vineyard. Though Thomas's wines can exhibit wonderfully pure fruit, when the fruit is from the Juffer, it is almost always lean - green apple and pear versus melons and pineapple. In any event, the main attraction here is the spectrum of minerality, a cacophony of slate and dried flowers, perfumes and ocean water. This Kabinett is so incredibly clean that if you had some discretionary income and were at least a somewhat mad, I'd highly recommend buying 50 cases and bathing in it. Why not? I've re-visited this wines a number of times since I've been back, and it is definitely gaining some weight, though it still remains incredibly elegant with tremendous drive.

It is Kabinetts like this that remind me how profoundly undervalued this genre of wine is. Yes, people seek out the glorious dessert wines with wild abandon, as they well should, but the delicate, feather-like Kabinetts should garner more respect than they do. Remember that historically the "Kabinett" wines were the special bottlings locked away - in, well, the cabinet - thus the name. It was the 1971 German wine law that turned this into a banner for the early harvest wines, the skinny kids with energy and raucous charm. Though underappreciated now, if the heat continues to escalate, we're going to have to put the Kabinett on the endangered species list. Believe me when I say that if the polar caps melt and my apartment vanishes under the rising tide of the East River, I'll lament the extinction of great Kabinetts like this. I'll also probably be upset that my apartment is gone.

Thomas's talents, however, transcend the Kabinett. I thought the 2006 Niederberg Helden Spatlese was one of the most elegant spatlesen I had the entire trip. Incredibly rich, for sure, yet uncompromisingly elegant. The nose exudes honey and cotton candy, rich melon fruits, dried flowers and a soft moist earthiness that just adds such a delightful layer of complexity. On the palate, the wine is full, yet the fruits link up and the whole wine has just a stunning balance and the driving acidity is perfectly integrated into the wine - a spine running through the entire body of the wine.

The Niederberg Helden vineyard just outside of the tiny village of Lieser.

The 2006 Brauneberg Juffer Sonnenuhr Auslese Goldkapsel is profoundly aromatic. I wrote the following in my tasting notes: "Like walking into a flower shop." This is the point in the tasting where my jaw began to hit the floor. The florality on this wine is intense, and there are interesting savory notes that pop their head up every once in a while, like sage. The vineyard shows its stuff with this crazy balance between the intensity of the flavors - melon, marmalade and honey - and a profile that is defined by a minerality layered in silk. The texture of this wine is just stunning. Believe me, even just a half-bottle will leave you spinning.

The 2006 Lieser Niederberg Helden Auslese Long Goldkapsel does take it up a notch, which is not always the case with these crazy goldkapsel monikers. There is undoubtedly a creaminess to this wine, a softly sweet sourness, not unlike a dollop of creme fraiche. In any event, this soft note adds a wonderful complexity to the wine that is just somehow perfect, and all these richer textures are checked by a fresh acidity. The flowers and rocks theme that seems to be one of Thomas Haag's signatures is plenty evident here. This is just exceptional wine.

And the 2006 Lieser Niederberg Helden BA? Well, this wine is so rare that I almost don't want to write a tasting note for it. This is vivid, penetrating, technicolor florality; a richness energized by acidity and with an amazing persistence that just reverberates across the palate. My tasting note here ends with this silly, yet honest, note: "More of the same. Very good. Very very good."

All in all just an amazing visit and I thank Thomas Haag not only for his wines, but his time and generosity. Watch out for Schloss Lieser; you have been warned! To support Thomas Haag and invest in his crazy-good 2006 Rieslings, please click below - this will show you what we still have in inventory.