I liked the wines of the Scholium Project the first time I had them. While the landscape of California (as translated through grape and wine) is so often a full-throttle world of nearly overwhelming power, the wines of Abe Schoener's Scholium Project combine a tactile (and yes, ripe) intensity with a mysterious complexity that gives the wines a most unique, and most singular, profile.

A Jeroboam of 2004 Scholium Project Babylon is poured.

I also liked Abe Schoener the first time I met him; there is an honest rigor to the way he works and thinks - which is, I suppose, to be expected as Abe is a former professor of Greek Philosophy. In fact, I believe the wines of the Scholium Project really do embody the notion of "winemaking as thinking." I wrote an essay all about this idea - a meandering and philosophical treatise that undeniably flirts with the ridiculous, as well as hopefully with a touch or two of the sublime.

The lineup involved a number of new releases as well as a bevy of back-vintage goodies brought from California by the man himself, Abe Schoener...

Round 1: 2007 Naucratis
This is a tank fermented Verdelho from the Lost Slough vineyard way down in the Sacramento Delta! I've never been there but Abe tells me this is a lazy, hazy place and the Lost Slough vineyard is a wiley arena full of funny strangers - Verdelho and Arneis and Orange Muscat. The vineyard is actually about five yards below sea level and the fruit it produces is ripe and round. You can taste it in the wine. The Naucratis is unabashedly fun - mouthfilling juice with big plump corners, ripe joyous notes and a graceful slide across the palate that makes one slurp easily fade into another slurp, and so on. Happy wine - the 2007 will be available sometime soon.

Round 2: 2006 La Severita di Bruto
Driving, shrieking Sauvignon like some sort of wild-eyed child of Didier Dageuneau and F.X. Pichler. While it's broader, with bigger shoulders and a bit more muscle to flex, the wine certainly has a bit of that minerally base and extreme focus that so distinguishes the Sancerres of Chavignol. This is one of my favorite Scholium Project wines out there (along with the silly rarity "Glos," made in a yearly donation to the world of about 10-14 cases) with supercharged lime zest and an acidity that is coiled and taut, persistent and glowing. Abe says that the Farina Vineyard is, "in some senses, the single most promising vineyard [he] works with." The grapes for the Severita di Bruto are sourced from a section of the vineyard that's rocky and steep; Abe describes the site as a "granitic rockpile" - the poor soils forcing the vines to produce concentrated, small berries. I think it's safe to say this is one of the most impressively focused Sauvignon Blancs out there.

Round 3: 2006 The Prince in His Caves
We'll continue here with the winemaker comparisons, though this one's easy: Fiorano meets Kongsgaard. Eccentric Sauvignon Blanc from a less punishing part of the Farina Vineyard - the same vineyard as the Severita di Bruto. The fruit here is richer and fuller and spent 3 weeks fermenting on the skins after which the juice was put in 80% new wood where it finished its fermentation and aged for an additional 10 months. Though decidedly not for everyone this is also a wine that is not to be missed for fans of eccentric, earthy, floral, nutty whites - think Gravner, Radikon, Vodopivec and of course the eccentric Prince of Verosa himself, Alberico Boncompagni Ludovisi of the cult Fiorano estate, after whom the wine is named (wow, that has to be a run-on sentence). Abe's "hommage" is full and supple, concentrated with strange yellow-golden earthy fruits, honey, and melon with complex herbal notes and a luscious, easy going mouthfeel that is textured and layered. The wine unwinds in the glass to become more and more beguiling. I've had this wine about 10 times in the last month and it is in some sort of glorious phase right now - penetrating and vivid. A treat for the palate.

Round 4: 2004 Scheria
The first of the back-vintage treasures that provided the opportunity to size up the development of one of Abe's hearty reds. This is Syrah from the Hudson vineyard - keep in mind some big names in California, like John Kongsgaard, use fruit from this prime site. Though the wine needed a half-hour or so to really come around and flex its muscle, when the midpalate opened up it showed that meaty complexity and layers of finely textured earth, minerals... "burnt things" for lack of a better descriptor. I don't know if I'd call the wine exactly agile, but still, compared to the very burly 2005 Babylon (granted, different grape, different site), the 2004 Scheria does seem to have tightened its belt a bit, sort of slimming up while at the same time keeping its heft and weight. More on this below vis-a-vis the 2004 and 2005 Babylons. 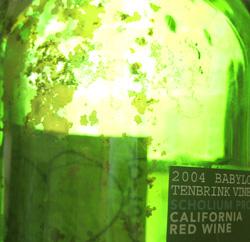 Round 5: 2004 Babylon out of Jeroboam
The main lesson here? It's very fun to drink wine out of an enormously big bottle. Another treasure from Abe's cellar, one of maybe 6 of these bottles in existence (?) and for me, the hand's down star of the night. I mean really, I wish I could have brought this bottle around to all the non-believers - this is an intense Petite Sirah at well over 15 degrees alcohol, and yes it was definitely piercing and aggressive (10,000 arrows shot swiftly through the night), yet the alcohol framed and was well incorporated into the wine which just attacked the palate in some wildly suave and stylish dance. Neither the 2004 Scheria nor the 2005 Babylon were quite agile - THIS was absurdly agile with perfect balance (a hearty heaping of cooked fruits and earth needs some alcohol to hold it all) and was just a shockingly good wine.

Round 6: 2005 Babylon
A very tough act to follow and while the 2005 Babylon has exceptional raw material, it will need some bottle time to come into the focus that the 2004 was showing this night. I should mention something about the vineyard, as Abe is quite in love with it. The Tenbrink Vineyard is in the Suisan Valley, "far enough from Napa to represent the mysterious, distant East" writes Abe. The vines produce few clusters of small-berried fruit; underneath a natural ground cover flourishes. The site is meticulously maintained by the Tenbrink family and it's just an utterly unique place that produces very good fruit. The 2005, as I said, is a burly wine that benefits tremendously from a decant, with ripe tannins that provide considerable structure - indeed, the juice spent more than 5 weeks with its skins. Given the heights of the 2004, I'd expect very good things from this wine.

We finished up with two dessert wines - 2002 and 2005 Oro Puro. But honestly, at this point my palate had been just beaten up and as I'd been going around and talking with all the good folks at the table, I was catching up on some eating while these were served.

All in all a very good night. Abe, Mark and Robert deserve much credit and thanks for helping me put together the event.