I have to admit, I struggled with the idea of yet another Riesling email so early into 2007. After your strong interest and support of the 2005 vintage led to its enormous success, I felt that perhaps we should take it easy with the Riesling offers - even though Germany, along with Burgundy and Champagne, is an area whose heat is currently immeasurable.

One of our finds from a German trip, the initial delivery came in December having been procured directly from the producer's cellar, awakening it from a peaceful 18-year slumber. Letting the wine settle after its journey, we opened a bottle in the madness of the holiday rush and the entire staff needed "crowd control." The Simon showed unbelievable concentration and complexity. Maturing Riesling of this quality is truly one of the most exotic encounters you can have with a wine. I encourage everyone to try it at least once in their lifetime.

The �gold capsule� denomination is often used by German winemakers as a way of indicating that the bottle is made from the vineyard�s best vines (see sidebar), and the 1989 Simon Gold Cap shows off this exceptional pedigree, opening up with delicate smoke and petrol, intermixed with caramel, confectioner�s sweets and just the kinkiest bit of raw honey. The palate is supple and enveloping, with luscious waxy ripe fruit and spiced pear balanced by a base of green apple freshness, fine acidity and a thrilling red spice finish. Think Grand Cru white Burgundy with a splash of Yquem. (FYI - The bottle is currently being poured to match the fois gras course at Thomas Keller's Per Se and French Laundry.) 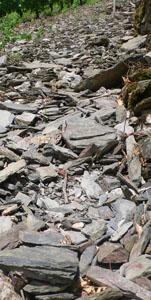 1989 is an exceptional vintage, famous for its wines of Auslese ripeness and higher. The Saar and the Ruwer valleys experienced the region�s best growing conditions, with their wines actually outperforming the more famous counterparts from the middle Mosel. Bert Simon is directly in the "sweet spot" for this awesome vintage, owning some of the choicest real estate in the Saar valley. Rudi Wiest, the famed Riesling importer (and scholar of German wines for 30 years), considers Simon�s vineyards some of the best terroir in the Saar valley. The Serrig W�rtzberg plot is frighteningly steep, a radical precipice of slate and vines that drops into the Saar river (see pictures). The severe angles, however, expose the vines and coax maximum ripeness and concentration from the grapes. These factors (stellar vintage, great vineyard) have come together to create the "perfect storm."

This wine is a rare treasure, a profoundly flexible Riesling that I believe would be stunning as an aperitif, could certainly pair with any number of foods (Thomas Keller obviously agrees), and has the richness to even moonlight as a dessert wine, as long as the dish itself isn�t too over-the-top.

Breaking it Down:
German Wine Labels

More confusing than tax law, filled with more information than the OED, the German wine label is an exercise in precision: the ultimate information machine. Let�s break it down.

1. Vintage. The year the grapes were grown and harvested.

2. Winery / Estate. This is the producer of the wine.

3. Grape. Germany, unlike most European countries, does place the grape name on almost all of its bottlings. Though Germany grows many different grapes, the most popular are Riesling, M�ller-Thurgau and Silvaner.

4. Ripeness Level. This is where it gets confusing. The simple version is that higher quality German wines are segmented (and labeled) by their ripeness level � literally measured by the amount of sugar in the grape juice (called �must�) before fermentation. Why do different grapes have different sugar levels? Because they�re harvested at different times. A German winemaker may harvest grapes 6 times over a period of two months. The riper the grapes, the more sugar in the must, the heavier the must, the higher the �ripeness� level. These various ripeness levels often correspond (but not always!) to the amount of sweetness in the wine. They do not distinguish quality. The ripeness levels are, from lowest to highest: Kabinett, Sp�tlese, Auslese, Beerenauslese (BA), Trockenbeerenauslese (TBA) and Eiswein. While BA, TBA and Eiswein are considered dessert wines, Kabinett, Sp�tlese and Auslese wines are great food wines, to be paired with many entr�es.

5. Village / Vineyard. German wine labels also let you know both the specific vineyard where the grapes where grown as well as the village. In the example above, the village is �Piesport,� while the vineyard is �Goldtr�pchen.� For today�s offer, you now know that the W�rtzberg vineyard is in the village of Serrig.

6. Region / Appellation. There are lots of regions. The most famous are the Mosel-Saar-Ruwer, Rheingau, Pfalz, Rheinhessen, Nahe and Franconia.

7. VDP Logo. The VDP is an elite group of German wine estates. A bottle with this logo means it�s of great quality.

8. AP Number. This is the official government number for the bottling. The number denotes where the wine was tested, where it comes from, the producer�s code, etc. Why is this important? In most cases, for most wine drinkers, it�s really not important, though �wine geeks� often keep track of AP numbers because they can be used to distinguish different bottlings from the same vineyard. Importantly, another way producers distinguish wines from single vineyards is by giving the bottle a gold capsule, as with today�s offer!