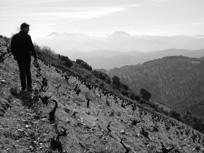 Today's "under the radar" offer comes from not-so-anonymous winemaker Alvaro Palacios and nephew Ricardo Perez, who are making absolutely stunning wines from tiny ancient vine sites in the Bierzo town of Corullon (see below).

While we've heard comparisons between these vineyards and Burgundy's Côte d'Or, or Piedmont's Langhe hills, topographically the landscape is more like Wild West meets ski lodge.

The whole town of Corullon is at about 800 feet above sea level, while the highest vineyard, "La Faraona" peaks near 3000 feet. To put this in perspective, tending vines here is like trying to grow grapes nearly halfway up Mount Washington or at the summit of Mt. Greylock (the highest mountain in Massachusetts).

Many vineyards also have to protect their crops against foraging wild boar, and as you can see for yourself, the slopes are impossibly steep and require that all vineyard work is performed by hand and mule (!). All farming is biodynamic and the attention to detail that each bunch of grapes receives in the field continues in the winery, where de-stemming is done wholly by hand.

So Why Grow Grapes here? 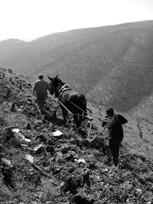 Winemakers Palacios and Perez wholeheartedly believe that stress on the grapes is a good thing, and we can't argue given the spectacular results: textbook Mencia flavors of raspberry & blackcurrant are taken to completely new heights. These are compelling, head-spinning, toe-curling wines that come as close to Grand Cru Red Burgundy in concentration, quality and long term ageability as any we've tasted.

The climate in Corullon combines Continental heat with Atlantic moisture (the coast is about 120 miles away). While many grapes in other parts of Spain were fried due to the intense heat of the summer of 2003, the elevation of the Corullon vineyards made for hot days, but also cool nights -- giving the vines a much needed break.

The 2003s are wines of certainly larger scale and are broad in length and flavor, but have retained all of the aromatic complexity that has enticed a small but enthusiastic following.

The Making of an Estate

Alvaro Palacios discovered Bierzo when traveling around Spain selling barrels in the 1980s while also looking for the best sites to grow grapes.

While Priorat was his first choice, Bierzo stuck with him as a strong second choice, perhaps because of the difficult growing conditions.

Fresh off a string of successful vintages of l'Ermita, Alvaro began looking for a new challenge in the late 1990s.

He partnered with nephew Ricardo Perez (no slouch in his own right, Perez studied in Bordeaux and then worked a harvest at Margaux and interned at Moueix properties Pétrus and Trotanoy) and begin acquiring old sites around the Bierzo town of Corullon with average vine ages of 60 to 100 years old.

Together the pair dedicated the project to Alvaro's father and Ricardo�s grandfather, and labeled the wines "Descendientes de José Palacios".

The first vintage of Corullon wines was in 1999, and in 2001 Alvaro and Ricardo began to single out vineyard sites for their individual expressions of terroir.

Where in the World? 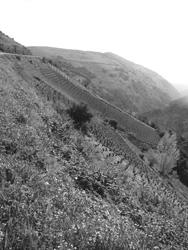 When you think of Spanish wine, Rioja and Sherry are usually all that come to mind. Few people realize that Spain has planted more acres of vines than any other country in the last 20 years!

Nestled in the valleys of the Sil, Ancares and Burdia rivers, Bierzo is located in the northwestern corner of Castilla y León, due north of Portugal. High surrounding mountain ranges protect the slopes from the excesses of both continental and temperate climates.

El Bierzo has been around since the 11th century, AD, but was only officially recognized as a winemaking region in 1985. So why haven't we heard about Bierzo until just recently?

Bierzo's relative anonymity is rooted in Medieval times, when winemaking began in the region. Benedictine monks first settled the region and, noticing particularly favorable conditions, grew the first grapes for wine. The result was quite impressive and winemaking slowly spread through the nearby hills.

Unfortunately, due to the distance from the early court and later analogous population centers, the excellent reds weren't fully realized until the last 20 years. Now that Bierzo has obtained full DO status, the region certainly has the potential to join the ranks of Spain's high-profile wine regions.

Schist soil with some chalk. The lowest elevation vineyard of the bunch ("only" 1600 ft.) offers richness, opulence, and minerality.

Schist plus clay and slate soil results in a deeply complex, powerful wine. This one will age for a long, long time.

From the highest vineyard elevation (3000 ft), "the Pharoah" is grown in schist and sandstone soils. Absolutely stunning, with ridiculous length on the palate and a profound, transcendent sensuality.