The stunner of the Savoie returns for summer sippin' 2009!

Yes, it's gray and overcast in New York City (summer retreats for a moment after the glorious holiday weekend weather) but don't worry, summer will return. The blast-furnace heat is destined to overwhelm and when it comes...be ready.

We have the antidote, a curiosity of quality and crispness. The 2008 Berlioz Chignin howls of its Alpine homeland and even if you have no idea who or what Chignin is - it doesn't matter. The palate knows and the 2008 Berlioz unleashes powerful citrus fruits, lemon and green apple, touches of pear and a chalky minerality that's peppered throughout the long (long) midpalate. (For those who want to know more about Chignin, click here.) 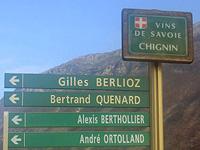 At $17.95 - and down to $16-and-change on the 6er - this is a value that could only come from a place left of center, from a region where there is little pomp and circumstance -- just great winemaking.

Try and find a bottle that is as imminently gulpable. Take the renowned "zing" of a Sancerre, add the solid bones of a village Burgundy, the chalk of Chablis and the florality of Condrieu - that's something of what you get with this Chignin. (Bizarrely, there is a Muscadet-ness to a good Chignin as well, though the locals couldn't be more different.)

This is the 3rd year in a row we've been able to source a small amount of Gilles Berlioz's Chignin and that makes us proud and very happy. Berlioz's Chignin is a wine that has had an incredibly high re-order rate the last two years running, and when the supply ends, there's an almost tactile feel of disappointment in the customers' expressions - even in their postures, as if all the air's been let out and they walk out of the store, hunched over and melancholy. Another year till it returns...

Like the Becker Pinot Noir offered out last week, the wine's value could overwhelm the quality in the bottle. So a few lines should be dedicated to the true character of this bottle, and of Gilles Berlioz as a winemaker.

The Savoie has a wine culture that operates in fast-forward, with new vintages often bottled shockingly early and gulped down even quicker by the local populations as well as the visiting tourists. A full 80% of the wine produced in the Savoie is consumed there! Gilles Berlioz, however, is one of the few producers who truly seeks something more from his vineyards and from his wines.

In fact, while most harvest in September and bottle soon thereafter, Berlioz purposely holds off on bottling, preferring to allow the wines to round out and develop in the bottle. This is one of those tiny acts of courage, heroics in the face of capitalism, because waiting...patience...costs money and adds considerable financial stress, especially for a rather small domaine. To say nothing of the fact that you miss the easy sales from the tourists!

Gilles Berlioz is a relative newcomer, one of the many faces of a new generation of winemaking in the Savioe that is looking deeper and thinking a bit more about how wine could (should?) be made in this high-altitude wonderland.

He's made a quick name for himself and while few bottles make it to the U.S., the quality and personality of his wines (and yes, the value) have made them *very* popular in Parisian cafes and French wine blogs alike.

This is as versatile a white wine as is made and everyone is strongly encouraged to pour the Chignin with wild abandon with a medley of spring / summer greens, it'll pair well with fish and light meats though it's also fresh and clean enough for summer BBQs and picnics. Take advantage of our special 6-pack price because in August, when standing on the sidewalk feels like you're two feet behind the afterburner of an F-16, we surely won't have any more Berlioz.