The methods I used to determine my "Wine of the Year" have nothing to do with point scores or detailed comparisons of the thousands of wines I have tasted over the last 12 months. My metrics are much more simple and visceral - last year Forte Canto swayed me with its "Gulp-ability Factor."

This year I declare Cazin's 2002 Cour-Cheverny "Cuvee Renaissance" my Wine of the Year, citing the"Lemonhead Effect!"

Huh? Well, Mr. Lemonhead (of the eponymous candy... remember those?) is one of the things I think about when I'm drinking this wine because the bottle has the shocking intensity and juicy succulent citrus fruit that will knock you off your feet and take you back to a time when things were, well... simpler.

In a world that desperately needs to categorize just about everything, this wine stands far out in left field, baseball mitt on its head, facing away from home plate, singing a song. This wine is a time machine, bringing back memories of trips to movie theater concession stands and mall candy shops over the last 30 years - "the Lemonhead Effect!" (Don't worry, unlike the candy, this wine doesn't taste sweet at all.)

The 2002 vintage of "Cuvee Renny," as it is affectionately known to a small cadre of devotees, is a unique re-release directly from the estate, a celebration of one of the Loire's great vintages. Somehow, the years in the cellar have given the wine the ability to seamlessly combine an oily, unctuous, and luscious mouthfeel with a laser-like precision that could cut diamonds - a paradoxical razor's edge that is as sharp as it is smooth. 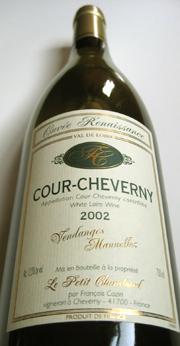 But what brings me back to the wine, time and time again, is this Punky Brewster vibrancy that continues to improve in your refrigerator for 2, 3 and 4 days - begging you to check in on it as compulsively as you do your personal email at work.

If you must have some sort of wine comparison, think of the Cazin as a hypothetical blend of ripe-vintage Cotat Sancerre Culs de Beaujeau, an unoaked Raveneau Blanchots and the epic Donnhoff Niederhauser Hermannshohle Spatlese.

Perhaps the most exciting aspect of this wine is its ability to merrily dual with some notoriously difficult dishes, from Thai Green Curry to Chicken Vindaloo - as I write this email the wine is successfully tackling a tofu teriyaki bowl!

Due to the incredible backbone provided by the 2002 Loire vintage, my guess is the Cazin will provide 20-30 years of pleasure and enlightenment, though it will be difficult for most of you to stop yourself from cracking all of your bottles within the next 5 years... or 5 months!

I have no idea why Francois Cazin grows the nearly extinct Romorantin (see below for more on this esoteric grape and its tiny appellation) or what possessed him to make a botrytized version, but I do know that this "Romo" as it's referred to by wine geeks, has nothing to do with the Dallas Cowboys but will be appreciated by even your biggest beer guzzlin, football-loving friends.

Sadly (or happily?), the 2004 Cuvee Renny was recently "discovered" by the Wine Advocate and awarded big points. The cat may be out of the bag about Cazin, but luckily the critics have not written about the 2002 - if they had, its numeric ranking would have undoubtedly sent the masses into a frenzy. (Exhibit A: The mad rush for 2005 Dagueneau Pur Sang after its high scores this year.)

While I will still love the 02 Renny after its inevitable discovery by the mainstream and pricing at $40 a bottle, at under $25 it's about as inspiring an experience, and as great of a cellar-steal, as you will find.

Not surprisingly, we do not have much of this wine!

The 2002 Cazin is a bottling that I'd been looking to buy for my own personal cellar for quite some time and I was delighted when I was able to secure two shipments of equal size, available for the first time - and last time - at this price. (The 3rd and most recent Fed interest rate cut does not leave me very optimistic about the dollar's strength v. the Euro in 2008.)

So, please join me in a salute to the lip-smacking, hedonistic joy inspired by Mr. Lemonhead - secure yourself a few bottles (or up to a case!) by clicking below or calling the store at (212) 980-9463.

Although Francoise I is credited with planting the grape 1519, the region only gained official AOC status in 1993. Romorantin can be very neutral tasting when young, and there are a few exceptional bottlings that come from Cour-Cheverny.

Cazin's crazy botrytized late-harvest "Cuvee Renaissance" is certainly one of those wines. Another would have to be Marionnet's legendary "Provinage" bottling. This is a Romorantin made from vines that were never attacked by phylloxera - one of the few vineyards in Europe to be able to claim such an uninterrupted history.