In the tiny town of Gardiner, nestled deep inside New York's picturesque Hudson Valley, the Tuthilltown Spirits distillery has captured the attention of the whiskey world. Tuthilltown is the first and only distillery to produce whiskey in New York State since Prohibition, but their production is anything but modern. They use grain grown on Hudson Valley farms, making all of their whiskey by hand in one building. They even bottle and label their finished products by hand, and each bottle is hand-numbered with batch, year, and bottle number. This attention to detail shows in the whiskey, too, as their final product 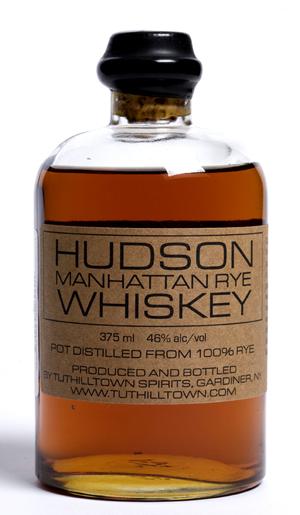 is at once classic and entirely unique.

The first Bourbon whiskey produced in New York State, it's called "Baby" because it only sees a few months of age in 3-gallon oak micro-casks. This innovative process results in a vibrant whiskey that retains the creamy sweetness of fresh corn smoothed out by a touch of vanilla and caramel.

Before Prohibition, hundreds of distilleries made rye whiskey in New York. This bottling is an appropriate homage to those long-gone producers - small batches, single malt, and miniscule production. Tuthilltown's Manhattan Rye is slightly floral on the nose and has a pronounced peppery, spicy finish, and practically begs to be put in a cocktail glass with some good bitters and vermouth.

A blended whiskey made from corn, rye, wheat, and malted barley, this is Tuthilltown's most complex drink. The sweet nose will remind you of the corn whiskey, and the spiciness comes from the rye, but the wheat and barley combine to make this bourbon richer and fuller than its single-grain counterparts. Like the Baby Bourbon, the Four-Grain is aged for a short period of time in tiny barrels.

Tuthilltown's take on Scotch or Irish whiskey, made exclusively with malted barley, the Hudson Single Malt gets some extra depth and body from the new American Oak casks. Best served up with a splash of water.

Made from 100% local corn, this is moonshine with a whole lot of refinement. This whiskey is unaged, meaning it's crystal-clear in the bottle, but don't mistake it for vodka - its sweet attack and fiery finish remind you that this is most certainly whiskey. Enjoy it served neat, or as a base for a new twist on whiskey cocktails.