Since Crush has opened, we have become a haven for strange and obscure wines, always seeking out the best undiscovered bottlings from around the world.

Over the past year, I've quietly assembled the largest selection of Jura wines in New York, and maybe even the nation (we have 13).

This week, our cover was blown sky high by Eric Asimov who wrote a story on these esoteric wines.

In the case of the Jura, esoteric might be an understatement as the wines do not fit into any preconceived paradigm. While the region is only 50 miles from Puligny-Montrachet, what's in the bottle seems centuries removed from modern wine tastes.

While they include the structure, minerality, and acidity of Burgundy, the wines of the Jura also harken to Jerez with their oxidative and maderized aromas.

Given the very harsh growing conditions, (mountain weather, challenging soil and terrain with inclines that range from 10%-40%) many of the wines are made in a purposefully oxidative style, which is not for everybody.

Despite their lack of commercial success, the small growers of the Jura (only a handful of people own more than 75 acres) keep on truckin'.

How have these wines survived since their first mention in writing in 869? While endorsements from Louis Pasteur and Henry IV, who sent wines from the Jura to his mistress, certainly haven't hurt, the wines are still around because of their incredible food friendliness and excellent quality. Also, most growers are also farmers who sell their milk to the local Comté cheese Co-ops, so their livelihood is not 100% based on selling their wine. 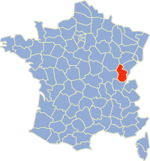 The name "Jura" comes from the Jurassic period when France was giant sea.

Lime deposits that many of France's vineyards are heir to from this period are more deeply buried in Jura than in other regions.

Here a heavy, thick layer of clay covers the limestone base, contributing to the fierce acidity that is a signature of Jura wines.

As with many mountainous regions, Jura's poor, rocky soils limit the scope of its agricultural production almost to the potato.

What the region lacks in agricultural fecundity, its compensates with lush pasture lands studded with wild flowers and herbs for cattle to graze on, thick forest filled with game and wild mushrooms, well preserved streams and lakes redolent with fish, a plentiful amount of walnut and chestnut trees (used not only in their natural state but also made into flour and oil), and great poultry and swine.

The brisk mountain air provides the perfect environment to cure ham and sausage.

Savagnin:
Thick skinned, and huge in natural acidity and luscious citrus flavors. Makes white wines in both oxidative and non-oxidative styles. A perfect match for Comte and Gruyere cheeses.

Chardonnay:
Accounts for 45% of Jura's vines and is made in the regions largest range of styles - from heavily oaked to ultra-traditional and oxidized, to fresh and sparkling. We have a Cremant de Jura made from 100% Chardonnay arriving next week!

Poulsard:
A very light, delicately perfumed red (or white) wine that acts more as a white wine regardless of skin contact. Hard to pin down. The intellectual freakshow of the bunch.

Trousseau:
Red grape with gamey, spicy, with red currant flavors, Trousseau is the favorite pair for the region's hearty game dishes. Because of its weight, it's often used to add heft in blends with Poulsard or Pinot Noir.

Pinot Noir:
Not a total stranger to red Burgundy but lighter bodied, with higher acidity. When made well it exhibits a tantalizing spiciness and refreshing tart fruit, not to mention the occasional floral notes and slight smokiness. Our Pinot Noir from Ganevat was so popular that we've sold every bottle except for the two that Crush partner Bob Schagrin had squirreled away in the back of the Cube!

Traminer:
A non-aromatic lighter bodied cousin of Gewurtztraminer, that is very similar to Savagnin.