After a painful two-year drought, Schaefer's insider's secret, his QbA Estate Riesling, is back in a BIG WAY. This is probably the best Estate bottling that Willi and Christoph Schaefer have ever put together, just another golden coin from the bounty of 2007 in Germany. 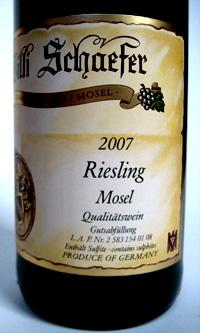 Don't let the price fool you - this is a serious Riesling (sourced from the Graacher Himmelreich vineyard) that is seriously gulpable. (See sidebar for an email from Christoph Schaefer regarding the philosophy behind the QbA.) Juicy, sexy, Middle Mosel fruit with a fresh lemon, grapefruit and green apple sheen, great minerality and a nervosity that makes the wine zing right now. Yes, there is some residual sugar, but there is also such a present and well-integrated acidity that the 2007 Schaefer does not come off as very sweet at all. Given the quality here, have no doubt that this bottle will develop in the cellar for 5-7 years and longer. (Would you expect anything else from the cultish estate of Willi Schaefer?)

Given my wine addiction and the huge number of wines to buy, I don't invest in a lot of case purchases. But If I had to pick a wine to cellar a case of in the short term, this would be it. Think of the 2007 Schaefer Estate as a beautiful "taste test" meets "science experiment." If you think the wine's a bit too sweet now, give it 6 months and open another bottle. You can play this game indefinitely!

Back in 2004 - the last time Willi fashioned his delicate Estate Riesling - I remember buying the final cases available (and a pretty serious stash, given that the few bottles that come to the U.S. are always guarded closely by Terry Theise's crew) and thinking that it would last forever.

Carefully tucked away in an unassuming part of our Riesling section, this was the bottle that I'd quietly recommend to friends and regulars. In a matter of weeks, the wine was vacuumed up by returning customers cashing in on a full case (an especially wise purchase considering that 2005 and 2006 would produce not a drop of this juicy little QbA QPR stunner). Interestingly, a few serious "insiders" were also tipped off that we were sitting on a stash of the wine and came in to stock up. (It's funny that Germany is beginning to mirror the Burgundian trend where the most interest in the legendary small production winemakers is for the top Grand Crus and for the entry-level wines...think Bachelet, Roumier, Mugneret-Gibourg, etc.)

In any event, when the dust settled there was even a slight tussle between staff members over who would get the last bottles; I ended up having to give up half of my stash. The fact that I still remember this, and am still annoyed, 3 years later, speaks to the seduction of this wine. Keep in mind I'm also desperately hanging on to my last two bottles, wishing I had bought more...

2007 has marked the glorious return of the delicate, tense and nervous Rieslings of the Mosel. We obviously bought as much of the 2007 Estate as we could, tearing through what we were allocated with a frightening speed through the final months of 2008. Expectations were high, and as bottle after bottle was cracked open by the staff (and sold to the fanatical collectors of Willi Schaefer) the desire only grew.

As 2008 has become 2009, the craziness of the market has resulted in a slight "loosening of the reigns" on the allocated gems of Willi Schaefer and because we've supported the wines so completely, we were given a crack at *all* the 2007 Estate that remains in stock!

This is your chance, and it's most likely not gonna come again. When things pick back up (and they will), the allocated gems of the world will again disappear - and I'll be back to mitigating staff squabbles over limited quantities of Willi Schaefer! But believe me, while this is a huge opportunity, it doesn't actually translate to all that much wine. When the quantities are gone, so is this deal. To order call the store at (212) 980-9463.

The 2007 Willi Schaefer Estate Riesling will be available for pick-up or delivery late next week!