This find is not from '05, but comes directly from the cellars of the producer that made our 2005 "Spatlese of the Vintage" ... and along with the '05 is considered one of his best efforts in the last 25 years...

I'm talking about the 1993 Zilliken Riesling Spatlese from Saarburger Rausch, of which we have secured a very tiny, but incredibly pristine allotment. To say the wines are perfect is no understatement - spinning kapsules and just-below-the-cork fills are the rule, not the exception. And it's no wonder: the bottles have been out of Hanno Zilliken's cellar for less than a month. 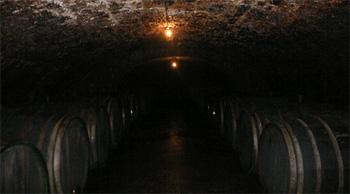 I bought the wine based on a conversation I had with Rudi Wiest after reading his 12-year-old tasting notes that said 1993 was: "such a superb vintage that it will rival 1990 and in some cases exceed its quality." He also writes that Zilliken made "the best wines since Hanno's famed 83's ... our initial barrel tastings in January showed very ripe, concentrated wines with a firm fruity acid backbone."

After confirming with him over the phone that 1993 and 2005 are nearly identical in quality and style, I requested all that he could pry away from Hanno's dank cold cellar (see photo above).

Last Friday, as we began to unload the first portion of our Riesling futures, I opened a bottle for the boys as they diligently broke down our pallet (Lest you think I was cracking the whip while having a German cocktail, I was also helping move boxes).

The wine is spectacular: while there is substantial petrol on the nose, the palate has only begun to develop secondary characteristics and is fresh, vibrant, and ethereally light in the mouth.

I was so happy with it (the gang concurred and are already jockeying for position to get some for their own stash), I brought another bottle out to dinner the following night with friends. With food, the wine was a showstopper, coming alive with beautiful pineapple fruit, and really opening up wonderfully as it warmed to room temperature. (the previous evening the bottle was finished in under 15 minutes!).

Many of you will find the wine to be at its peak for the next 3-5 years as it continues to develop secondary nuances, while those of you who prefer the funk will want to cellar beyond 2010 - the wine certainly has the acidity and fruit to last.

For those of you who have purchased the 2005, this is your one opportunity to "check-in" on the wine 12 years early to see what's in store for you with some serious patience (the '05 is undeniable for hedonistic drinking right now).

...means that wine came directly from the cellar (not a broker, store, or private collection).

This is important because wine is sensitive to heat, light, vibration, and temperature change, many of which can happen during transport. The best way to avoid these juice-damaging factors is to only move the wine twice - directly from the cellar to the seller, and again from the seller to your door.

Storing wines in perfect, subterranean cellars (like Hanno's) until purchase keeps the aging process slow and even and results in a "fresher" sense on the palate. While you may not be able to immediately tell if it is "Ex-Cellars" by tasting, you certainly can if it's not!